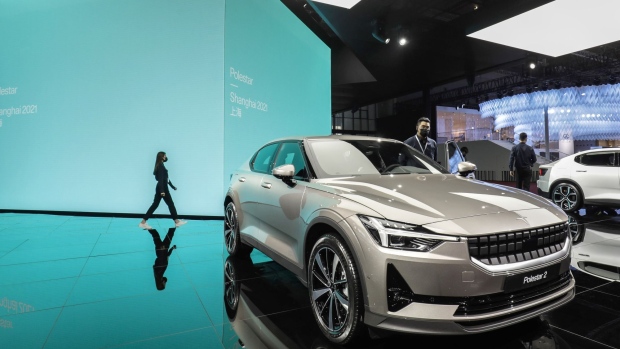 (Bloomberg) -- Chinese car maker Geely Automobile Holdings Ltd. plans to double down on its efforts to boost the sale of electric vehicles as well as bolster exports as it seeks to recover from disappointing first-half earnings that were pummeled by Covid lockdowns and supply chain snarls.

The shipments of new energy vehicles will account for more than 30% of the overall sales by the end of this year and continue the upward trend in 2023, company’s Group Chief Executive Gan Jiayue said in a media briefing Thursday.

The Hangzhou-based automaker will also focus on stepping up its exports, especially in Europe, Middle East, Asia Pacific and Latin America, Gan said. Geely saw its exports surge by 64% in the latest half-yearly earnings reported earlier in the day, well above the industry average of 50%, he said.

The renewed thrust toward what Geely deems its growth engines comes after the company posted a disappointing first-half profit. Net income dropped 35% to 1.55 billion yuan ($228 million) in the six months ended June 30 from a year earlier, missing the average analyst estimate of 2.77 billion yuan. Revenue, however, increased 29% to 58.2 billion yuan, beating the estimated 53.2 billion yuan.

For more details from the earnings report, click here

Geely, like many Chinese automakers, was hit by production outages and supply chain snarls caused by Shanghai’s two-month Covid lockdown. The automaker, controlled by Volvo Cars owner Li Shufu, delivered 613,842 vehicles in the first half, just over one-third of its initial annual target of 1.65 million.

“The group’s sales performance in the first half of 2022 was below management’s expectations, primarily attributable to the disruption to production and sales caused by the pandemic prevention and controls in some cities in China and global shortage of chips,” the company said in a statement Thursday.

New-energy vehicles accounted for about one-fifth of first-half sales. A relative late-comer to the EV race, Geely, which used to have a comparable market size with BYD Co. before falling behind, is pushing hard to catch up. It has introduced standalone EV brands like Zeekr and last month unveiled an electric pickup truck marque, stepping into a sector with fairly low penetration in China.

Although Zeekr only delivered a little over 19,000 units in the first six months, the company will stick to its annual target of 70,000 vehicles, An Conghui, company’s president said in the briefing. He added that the monthly orders continued to grow and the average sale price for Zeekr was around 335,000 yuan.

“The order volumes are much higher than what we were able to deliver,” said An.

Electric vehicles sales in China are forecast to hit a record 6 million this year as demand for cleaner cars surges, the China Passenger Car Association said earlier this month. They accounted for just over a quarter of all new car sales in July, the data showed.

The company is also trying to smooth out supply chain disruptions and has signed direct purchase contracts with semiconductor manufacturers, Gan said.

(Updates with management commentary in the first three paragraphs.)