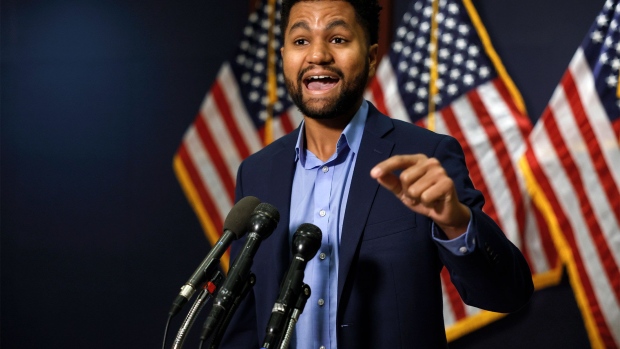 WASHINGTON, DC - NOVEMBER 14: Rep.-Elect Maxwell Frost (D-FL) speaks with reporters during a break in an orientation meeting in the U.S. Capitol Building on November 14, 2022 in Washington, DC. Over the weekend newly-elected members began the first session of their New-Member Orientation organized by the Committee on House Administration. Over 65 new members of Congress are going through the process as House races in several states remain to be called. (Photo by Anna Moneymaker/Getty Images) , Photographer: Anna Moneymaker/Getty Images

(Bloomberg) -- The first Gen-Z member of Congress is heading to DC — if he can find somewhere to live.

Maxwell Alejandro Frost had his apartment rental application denied by a Washington, DC, landlord, the representative-elect said in a tweet. Frost, who is set to make $174,000 a year as a freshman Congress member, said he applied to an apartment after he gave a prospective landlord notice that his credit score was “really bad.”

Frost said the landlord told him that the application should get approved despite his poor credit score. However, Frost’s application was still denied and he subsequently lost the apartment and the application fee.

In a follow-up tweet, he said it was his congressional bid that caused his credit score to take a hit. “I ran up a lot of debt running for Congress for a year and a half,” he said. “Didn’t make enough money from Uber itself to pay for my living.”

Frost is a former organizer for March for Our Lives and the American Civil Liberties Union, two nonprofit groups. He also picked up gig work through Uber, the ride-hailing app. He said quitting his full-time work was necessary given the demands of campaigning.

In an interview, Frost said that even with a letter from the House showing his congressional salary it did not matter because “in this country we allow numbers like credit scores to completely define a human.”

“It just shows how much of a problem we have,” he said. His initial plan was to couch surf while he was getting his bearings in DC, but the apartment he had applied for was within his budget.

The 25-year-old Florida native won an Orlando-area seat currently held by retiring Representative Val Demings and will become the youngest member when the 118th Congress convenes in January.

Members of Gen Z are aging into the workforce as inflation, interest rates and housing costs rise at rapid rates. They’re also facing these economic hurdles with lower credit scores than other generations: A report from Experian found that members of Gen Z had an average credit score of 679 last year. The national average was 714.

Credit card debt is also creeping back up as Americans face rising costs. Balances rose 15% from a year earlier as of the third quarter of 2022. The average interest rate for a credit card is above 19%, per Bankrate.

Frost isn’t the first member of Congress to face housing hurdles ahead of his first day on the job. Representative Alexandria Ocasio-Cortez, a Democrat from New York who worked as a waitress prior to her election in 2018, told the New York Times in November of that year that she was facing three months without a salary before her swearing-in.

“So how do I get an apartment?” she said. “Those little things are very real.”

--With assistance from Megan Howard.