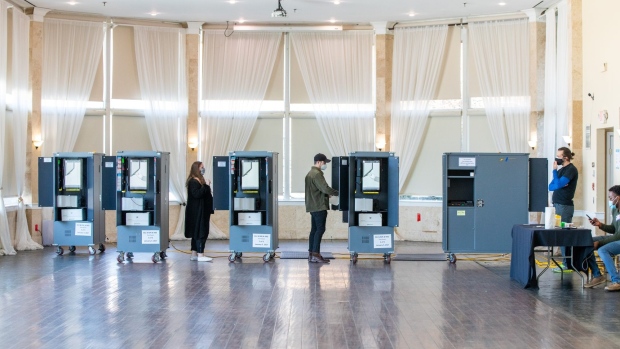 Voters casts their ballot at a polling location in Atlanta, Georgia, U.S., on Tuesday, Jan. 5, 2021. , Bloomberg

(Bloomberg) -- Georgia voters will determine control of the U.S. Senate in Tuesday’s twin runoff elections amid record-breaking turnout and intense national interest including visits from the outgoing and incoming presidents in the final hours.

The two Georgia runoffs were nationalized campaigns from the start. Fighting for party control of the Senate was huge enough. But against the backdrop of President Donald Trump’s baseless claims of vote fraud and corruption by Georgia elections officials -- topped by his extraordinary hour-long phone call demanding that officials “find” enough votes to overturn the presidential election -- they also became a test of Trump’s continued hold on the GOP.

The races also will determine President-elect Joe Biden’s power to advance his agenda, as Democrats need victories in both seats to leave the Senate with a 50-50 split, enabling Vice President-elect Kamala Harris to cast tie-breaking votes. If either Republican wins, Biden faces a still-GOP-controlled Senate largely unwilling to back many of his plans to develop a federal response to controlling the coronavirus pandemic, deliver more economic stimulus, or raise taxes on corporations and the wealthy.

First-term Senator and former corporate executive David Perdue, 71, is seeking re-election against Jon Ossoff, 33, a documentary filmmaker who gained national attention in a 2017 special election for an Atlanta-area House seat.

And Senator Kelly Loeffler, 50, the wealthiest member of Congress, is trying to hold on to her seat against a challenge from Raphael Warnock, 51, the senior pastor at Ebenezer Baptist Church in Atlanta, a job previously held by Martin Luther King Jr.

There is a chance a winner will not be determined in either or both races for days, or weeks, as all the mail-in votes and other are counted, and victors are certified.

Democratic wins would mark the first time Georgia elected a Democrat to the Senate in two decades, and if Warnock defeats Loeffler, he would be state’s first African-American U.S. senator.

Before the polls opened Tuesday morning, more than 3 million people had already cast their ballots, a record early-voter turnout for a Georgia runoff. Polls close at 7 p.m. New York time.

The races also smashed Senate-race spending records, together nearing a half-billion dollars spent since the Nov. 3 general election, on top of the $205 million spent before that, according to Rick Dent, a political consultant who tracks campaign spending.

“I don’t remember a time when control of Congress hinged on two elections in one state,” said Kerwin Swint, a political scientist at Kennesaw State University, of the high stakes.

Perdue and Loeffler, and Ossoff and Warnock, essentially ran as party tickets in their unprecedented all-or-nothing runoff, with good reason. History suggested they would be joined at the hip in the eyes of voters, anyhow.

There have been just 56 instances where both of a state’s senate seats were on the ballot in the same election since voters began choosing their senators in 1914, said Eric Ostermeier, a research fellow at the Center for the Study of Politics and Governance at the University of Minnesota’s Humphrey School of Public Affairs.

The outcomes have split by party only eight times, the last time in South Carolina 54 years ago, Ostermeier said.

In almost every way, Perdue’s and Loeffler’s calculations were to stick tightly to the president, or at least not alienate Trump voters and the party’s base. The duo both called for Georgia Secretary of State Brad Raffensperger to resign after he dismissed Trump’s allegations of voter fraud, and both have backed the effort in the Senate to challenge the election results when Congress certifies the November election on Wednesday.

Both Republican senators describe their foes as “dangerously radical” and warned Ossoff and Warnock would hand over power in Washington to “socialists” like Bernie Sanders and Alexandria Ocasio-Cortez.

Ossoff and Warnock depicted their wealthy Republican opponents as out-of-touch multimillionaires. Loeffler’s husband, Jeffrey Sprecher, recently became a billionaire and is the chief executive officer of Intercontinental Exchange, the parent company of the New York Stock Exchange. Loeffler co-owns the Atlanta Dreams WNBA team and some players have campaigned against her.

They both accused Perdue and Warnock of using their offices for questionable stock transactions to cash in on the Covid-19 crisis, although investigations found no wrongdoing. And during the battle in Washington over a Covid-relief package, both accused the senators of not wanting to help out-of-work Georgians.

Early voting data showed a possible Democratic advantage heading into Tuesday, including a larger percentage of Black voters than there were in the general election. Stacey Abrams, Georgia’s political star and former Democratic gubernatorial candidate, played a leading role in getting voters to the polls. Georgia Republicans tend, however, to vote in person on Election Day.

Andra Gillespie, a political scientist at Emory University, said some Black voters came to view Loeffler as using a “type of racially charged” language in some of her attacks on Warnock, a Black pastor. State Representative Roger Bruce, interviewed last week at one of a several church parking-lot rallies held for Warnock, agreed that Blacks were being motivated by what some consider “big time” racial overtones in the rhetoric on the other side.

That uncertainty over the impact of the Black vote contributed to the drama on Tuesday.