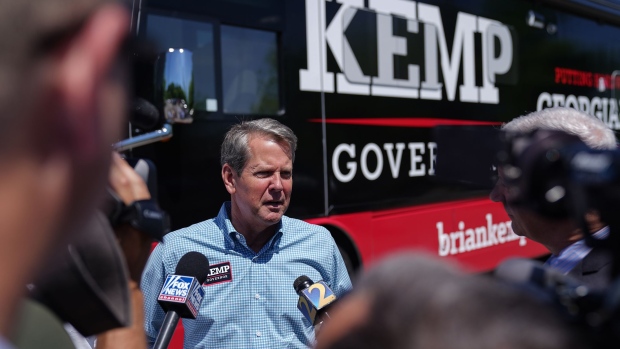 Brian Kemp talks to the media following a campaign event on May 17. , Photographer: Elijah Nouvelage/Getty Images

(Bloomberg) -- Georgia Governor Brian Kemp announced another electric-vehicle megadeal ahead of his primary on Tuesday: Hyundai Motor Co. is investing $5.5 billion to build an EV assembly and battery plant near the port city of Savannah.

The Korean automaker expects to create 8,100 new jobs with the twin plants, and will break ground early next year, the company said in a statement. Hyundai’s first dedicated EV assembly plant will start production in 2025, with an annual capacity of 300,000 vehicles. Hyundai said it will disclose its “strategic partner” for the battery plant at a later date.

Kemp has been racking up automotive wins for the Peach State, and handing out hefty incentives to win them. Last December, electric truck startup Rivian Automotive Inc. said it would build a $5 billion EV plant near Atlanta that will eventually employ 7,500 people. South Korean battery maker SK Innovation Co. has constructed a $2.6 billion factory in east Georgia to make power sources for electric vehicles, including Ford’s F-150 Lightning pickup.

Hundreds gathered in sweltering heat Friday afternoon under an outdoor tent in Ellabell, near Savannah, to cheer both the announcement and Kemp, fanning themselves with whatever could be found.

“I have the privilege -- and for the second time in the same fiscal year -- of welcoming the largest economic development project in the state’s history,” Kemp said. Rivian’s project was the largest single development in state history when it was announced.

The investments by the Korean companies comes as US President Joe Biden is in South Korea on the first leg of a five-day economic mission to Asia.

Incentives for the Hyundai project are still being negotiated and will be disclosed at a later date, said Pat Wilson, Georgia’s commissioner of economic development. He said incentives are a necessary tool to win jobs as states fight over EV projects.

“If Georgia did not incentivize the project, we would not be sitting here today,” he said in a phone interview. “It’s a very competitive market, with a premium on job creation in every state.”

In the state’s closely watched Republican gubernatorial primary on May 24, incumbent Kemp is pitted against David Perdue, who is backed by former President Donald Trump.

Not everyone has been happy with Kemp’s economic development agenda. Some residents living near the Rivian site in Rutledge, about 45 minutes east of Atlanta, have pushed back against the project, citing concerns about traffic, environmental damage and continued urban sprawl. Perdue, a former US senator from the state, has sided with local activists complaining about the Rivian plant.

Hyundai Motor Group, which owns both the Hyundai and Kia car brands, pledged in 2021 to invest billions in the US by 2025, a commitment that covers EV plants, hydrogen refueling stations and unmanned flying taxis. The Georgia project is part of that plan.

Hyundai sales in the US have increased since the company transformed its fleet to meet Americans’ demand for SUVs. It set a US retail sales record in the first quarter after increasing deliveries nearly 20% in 2021. The company said in April it will spend $300 million to expand its assembly plant in Montgomery, Alabama, to make a hybrid version of the Santa Fe crossover and an EV for its luxury Genesis brand, the GV70, this fall.

Hyundai Motor Group will produce “a wide range of full electric vehicles for US customers” at the new Georgia plant, the company said, without giving further details.