Germany’s economy shrank in the second quarter, ramping up pressure on Chancellor Angela Merkel to unleash fiscal stimulus as manufacturers reel from a U.S.-China trade war.

The latest report, paired with a protracted slump in business expectations, raises the risk that Europe’s largest economy is on the verge of falling into a recession. It would be the first in six and a half years. Separate data showed euro-area industrial production plunged the most in more than three years in June, while economic growth cooled to 0.2 per cent in the second quarter.

German output fell 0.1 per cent in the three months as exports slumped, a second contraction in four quarters. Merkel said Tuesday the country was heading into a “difficult phase” and even hinted her reluctance to respond is softening. 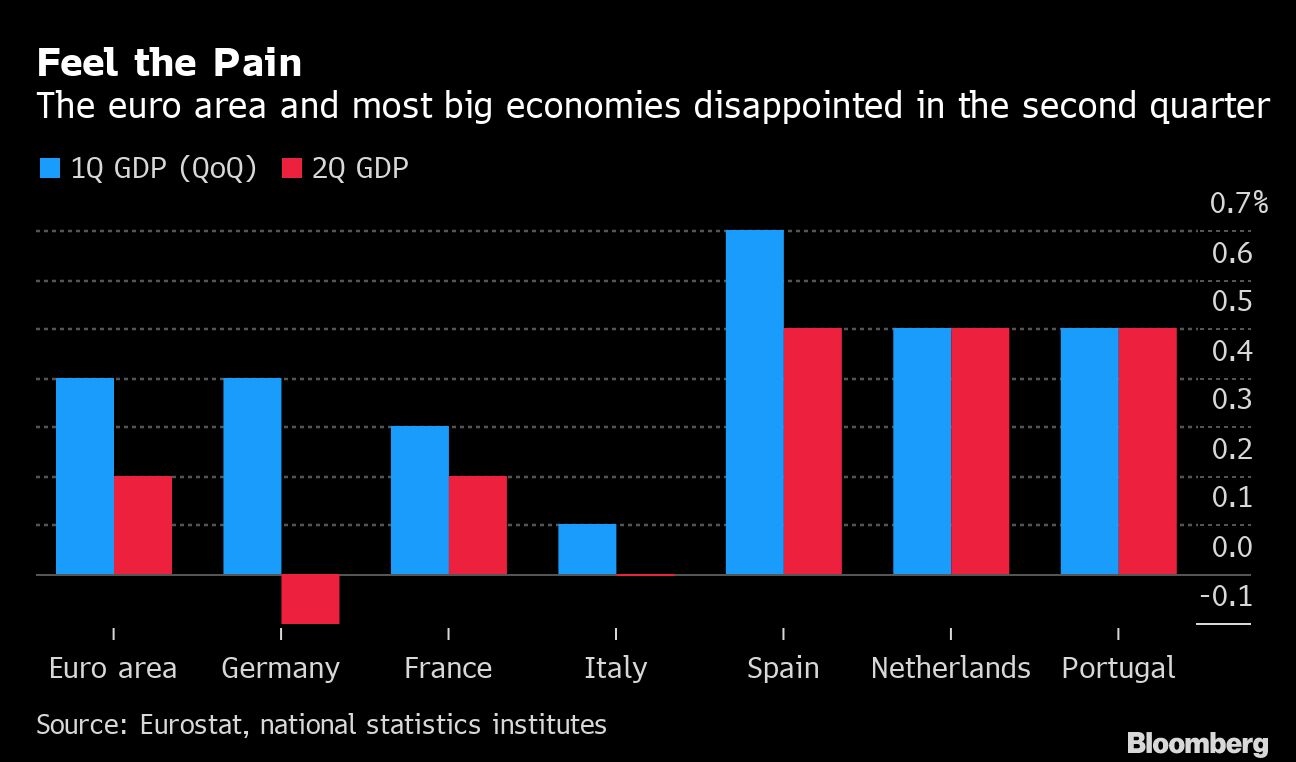 “We expect a period of protracted underperformance,” said Markus Guetschow, an economist at Morgan Stanley & Co. in London. Robert Greil, chief strategist at Merck Finck Privatbankiers said the second-quarter contraction “is not a drama but a warning shot.”

Germany’s performance is weighing heavily on a region struggling to sustain momentum. While the Dutch economy managed to maintain its pace of expansion, growth slowed in the largest euro-area countries. Profit warnings from across the bloc suggest little sign of a turnaround.

“The sick man needs its medicine,” Naeem Aslam, chief market analyst at TF Global Markets said. “Hence, the German Chancellor, Angela Merkel, will have to unleash a new fiscal stimulus package for her country to combat the effects of U.S.-China trade war. This may just do some of the trick for the euro-zone’s economy.”

Henkel AG summed up Germany’s woes in a profit warning on Tuesday. The industrial firm is facing pressure on two fronts, a slowdown in the auto industry and weaker demand in China, the same environment that’s crippled manufacturing across the country.

President Donald Trump on Tuesday delayed the imposition of some new tariffs on Beijing by three months to December. However, there was further bad news from China, the world’s second-largest economy, on Wednesday, with cooling retail sales and the slowest growth in industrial output since 2002.

In Germany, second-quarter output was damped by trade, with exports falling faster than imports. Private consumption and government spending rose, and investment increased despite a decline in construction.

“The industrial sector tipped the economy into contraction in 2Q, and the risk is of further weakness in the second half of the year. If there’s any good news to take from this release, it’s that services must have continued to expand, indicating patches of resilience persist.”

The European Central Bank has already all but committed to hand out fresh stimulus to jump-start the economy and is forecast to cut interest rates as early as September. All that has helped push yields on German debt to record lows below zero. Earlier this month, the euro fell to the softest since mid-2017.

ECB President Mario Draghi has been among the chorus of international voices pleading with Germany to loosen the purse strings after running surpluses over the past half decade.

German industry has been mired in a slump as worsening trade woes and weaker global growth sap demand for machinery and cars. Industrial production suffered its biggest drop in a decade in June, and freight volumes at German airports saw the steepest decline since 2012.

Among the casualties is Siemens, which said earlier this month it would struggle to meet financial goals because of a deteriorating economy and heightened political uncertainty. Automotive supplier Rheinmetall also lowered its outlook, scrapping expectations for a “tangible” recovery in the coming months.

--With assistance from Kristian Siedenburg, Harumi Ichikura and Catarina Saraiva.