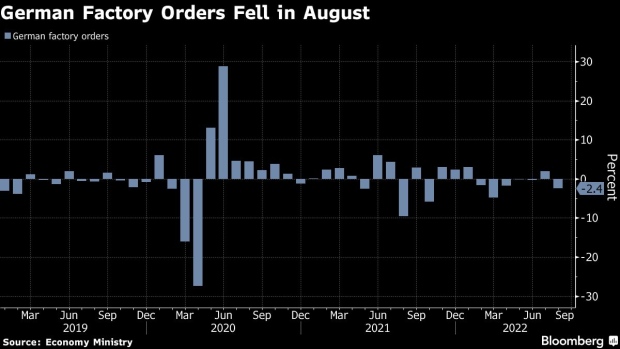 (Bloomberg) -- German factory orders dropped in August after the previous month was revised to show an increase, hinting at a lack of momentum as the economy stands on the brink of a recession.

Demand fell 2.4% from the previous month. Data for July now show a 1.9% gain, compared with an initially reported drop of 1.1%. The volatility was accounted for by late reporting of large-scale aerospace orders.

“Enterprises still have difficulties completing their orders as supply chains are interrupted because of the war in Ukraine and distortions persist that have been caused by the Covid-19 crisis,” the Federal Statistics Office said in a statement.

Germany is rushing to minimize the impact of surging energy costs after Russia curtailed supplies of natural gas in retaliation for sanctions imposed after its invasion.

Leading research institutes last week slashed their economic outlook, predicting a contraction of 0.4% in 2023 due to the crisis. This year and next, output will be €160 billion ($158 billion) lower than forecast five months ago.

Inflation, meanwhile, is running above 10% for the first time since the euro was introduced more than two decades ago, presenting an increasing burden on companies and households that the European Central Bank is seeking to counter by raising interest rates.