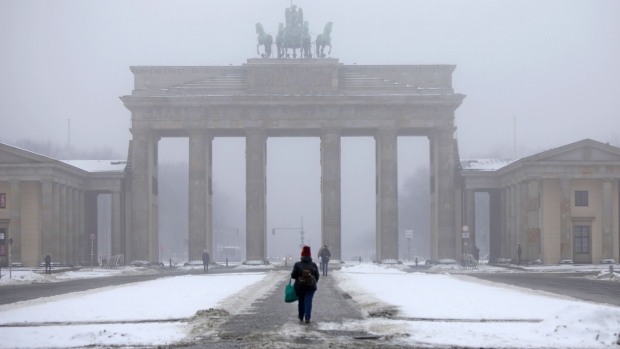 A pedestrian walks through snow near the Brandenburg Gate in central Berlin, Germany, on Tuesday, Feb. 16. 2021. Representatives of German industry protested in central Berlin on the day, when the country’s top business lobbies hold talks with Economy Minister Peter Altmaier. , Bloomberg

(Bloomberg) -- While another heat wave rolls over Europe, Germany is preparing itself for a long, cold winter as an energy crisis caused in part by Russia’s war on Ukraine drags on.

Russian President Vladimir Putin has already reduced natural gas deliveries to the country via the Nord Stream 1 pipeline by 80% and has threatened to cut Germany off from gas supplies completely. Almost half of all households in Germany use natural gas as their primary means of heating, and Russia until recently  accounted for 55% of the country’s gas imports. Replacing the dwindling supplies from Russia with gas from elsewhere in a few months is next to impossible, given the lack of infrastructure such as pipelines or LNG terminals.

That’s left Germans worried about freezing in the winter months: Already, some hardware stores are reporting that they’re selling out of electric heaters. “I have the feeling that we are sleepwalking toward a catastrophe,” said Lamia Messari-Becker, a professor of building technology and building physics at the University of Siegen in western Germany.

Germany’s government has asked citizens, municipalities and industrial consumers to save energy, and efforts can be seen across the country.

Berlin has turned down  the nightly illumination of the president’s residence, Bellevue Palace, and the Reichstag building, the seat of the country’s parliament. Officials are discussing whether to dim the Christmas markets in winter and debating how to keep public buildings like libraries open and warm. The Berlin Senate wants to cut at least 10% of its energy consumption, but decided against putting limitations on neon signs in public space.

Hanover, a city of 530,000 people, has lowered the temperature of the water in heated public swimming pools and turned off warm water in all city buildings in an effort to lower energy consumption by 15%. Some streets are no longer lit at night and public fountains have stopped running.

So far, the public is broadly accepting of such changes. Axel von der Ohe, first city councillor in Hanover, told public radio station Deutschlandfunk that the steps are necessary and most people understand the measures “because the situation is serious, and that’s why they show solidarity and go along with it.”

Even smaller municipalities have begun to reduce their energy use. The 9,000-person town of Pritzwalk in the rural east of the country, has outfitted street lights with LED technology. But small towns do not have a lot of wiggle room, Mayor Ronald Thiel said. “There is little savings potential in the energy sector in small municipalities such as Pritzwalk in the case of compulsory tasks, such as schools,” he said. “It would be more possible to make savings on voluntary tasks, such as cultural facilities. However, every contribution counts.”

Unlike countries such as Spain, Germany has not made energy-saving measures binding. Behavioral appeals alone won’t be enough, cautioned Karen Pittel, director of the ifo Center for Energy, Climate, and Resources and a professor of economics at the University of Munich. “In some areas, such as public buildings, offices, stores or even outdoor lighting, I can very well imagine such requirements,” she said, although for private homes, “incentives to save energy would probably work better.”

Vonovia, Germany’s largest real estate group, owns hundreds of thousands of apartments around the country and plans to gradually reduce its heating in its properties at night to shave 8% off its energy usage.

In Germany, natural gas is mostly used for industrial purposes (37% of the total), followed by household heating (31%). High prices and the potential shortage pose a serious threat to the German economy, which relies heavily on manufacturing. New estimates by the International Monetary Fund predict a slower growth rate than previously expected of 1.2% for 2022 and 0.8% for 2023, partly due to the energy crisis.

German industry is also trying to help meet an EU-wide plan to reduce gas consumption by 15%. Volkswagen has its own plant at its factory in Wolfsburg where it burns coal or gas, and says it will use coal for longer than it had planned. Switching to other energy sources is more difficult for the steel industry. Industry leader ThyssenKrupp is already anticipating a temporary drop in production.

Consumption cutbacks should be supplemented by more energy generation, Messari-Becker said. “We won’t be able to do it [preventing a gas shortage in winter] with savings alone. We also need to generate more [energy]. Every kilowatt hour that we produce extra creates security.” Messari-Becker said she did not see a short-term alternative to coal. Last month the German parliament voted to reactive defunct coal plants as a temporary measure, despite this running counter to its climate goals.

But some experts say that the concerted attempts to save energy shift needed attention to areas of the energy transition that have been neglected — such as greener ways to provide heat, like heat pumps.

That neglect “is now harming us, because the number of experts who know about it is too small and the hidden potential is still misunderstood by potential users,” said Stefan Büttner, an economist and expert in climate-neutral production at the University of Stuttgart. He said that while large companies have optimized their processes for efficiency, the same is not true for a lot of small and medium-sized businesses. Here, Büttner said, there is pent-up demand.

(This story has been corrected in the sixth paragraph to reflect that Volkswagen’s headquarters is not in Hanover; it is in Wolfsburg.)