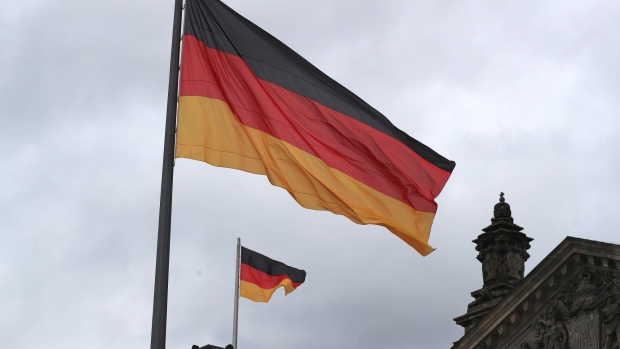 German national flags fly at the Reichstag parliament building during a "Fridays for Future" environmental protest in Berlin, Germany, on Friday, Sept. 24, 2021. Greta Thunberg is attending a demonstration in Berlin as part of a global climate strike organized by the “Fridays for Future” movement that the Swedish teen activist helped inspire. Photographer: Krisztian Bocsi/Bloomberg , Bloomberg

(Bloomberg) -- Germany’s federal government will increase debt sales by €22.5 billion ($21.5 billion) in the fourth quarter to help fund spending to soften the impact of the energy crisis.

Issuance of bonds and bills will total €106.5 billion in the October to December period, up from €84 billion in a preliminary plan announced at the end of last year, the Federal Finance Agency said on Wednesday. For the full year, sales will be around €445 billion, including syndicated issuance.

“The expansion of issuing activities is due to the federal government’s measures to address the energy crisis,” the agency said.

German bonds fell, sending 10-year yields 6 basis points higher to 2.29%. The benchmark had earlier climbed as far as 2.31% before the announcement, the highest since 2011.

Chancellor Olaf Scholz’s ruling coalition has put together three packages of measures to help households and businesses struggling with soaring energy costs. The initiatives are worth almost €100 billion in total.

The additional fourth-quarter borrowing includes €10.5 billion on the capital markets and €12 billion on the money market. The total for the period doesn’t include two planned auctions of inflation-linked bonds and one syndicated bond, the agency said.

Europe’s biggest economy has been especially hard hit by the energy crisis given its historic dependence on Russian fuel imports. Due to mounting concerns over energy supplies and record-breaking inflation that’s yet to peak, business and consumer sentiment deteriorated further, data showed this month.

The government is stepping up preparations for potential gas rationing, even after managing to fill storage facilities to more than 90% of capacity and rushing to seek alternatives to Russian supplies. It also moved to nationalize the country’s biggest gas supplier last week to prevent a potential collapse in the market.

Germany already unleashed a borrowing binge to help cope with the impact of the coronavirus pandemic, suspending a constitutional limit on net borrowing for three consecutive years.

Finance Minister Christian Lindner is sticking for the time being to his pledge to restore the so-called debt brake next year, even as energy crunch worsens and the prospect of additional government intervention becomes more likely.