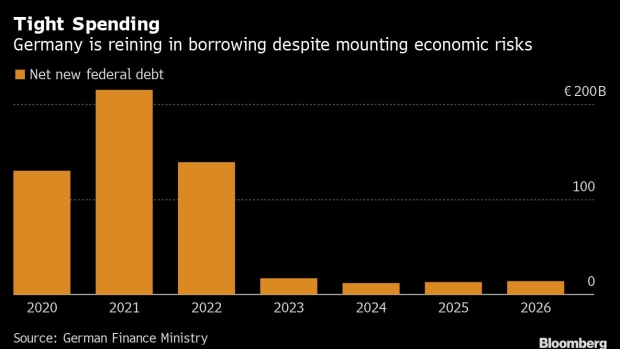 Germany more than doubled borrowing plans for next year amid mounting economic pressures from inflation and the war in Ukraine.

Finance Minister Christian Lindner is targeting 17.2 billion euros ($18.1 billion) in net borrowing in 2023, up from an earlier projection of 7.5 billion euros, according to two senior government officials, who asked not to be identified in line with protocol. The increase puts the government closer to the edge of constitutional debt limits, which have been breached for three consecutive years.

To protect Europe’s largest economy from the fallout from the coronavirus pandemic, the German government broke long-standing fiscal taboos, sidelining a rule that caps new debt at 0.35% of gross domestic product. Lindner has promised to reinstate the limit despite the current environment posing “a challenge.”

Germany has been hit particularly hard by spillover from the war in Ukraine, with manufacturers battered by intensifying supply bottlenecks and the country’s reliance on Russian energy threatening to tip it into a recession.

The borrowing plans are based on forecasts for the German economy to grow 2.2% this year and 2.5% in 2023, the officials said, reaffirming government projections. They noted that uncertainty is high due to economic and humanitarian risks related to the war in Ukraine and the pandemic.

The government plans investments of just over 58 billion euros, with nearly a third of that going toward transport. Lindner’s budget will be presented to Chancellor Olaf Scholz’s cabinet on Friday. It then needs to make its way through the parliamentary process.

While an easing of pandemic restrictions earlier this year temporarily bolstered momentum in services, companies and consumers are also facing inflation rates of nearly 9%. The latest data for June is due to be released later on Wednesday.

The government has sought to offset part of the burden by subsidizing public-transport use, incomes and fuel costs -- measures which raised this year’s borrowing plans to nearly 140 billion euros.

The ruling coalition has been quarreling over extra spending, which could lead to revised borrowing plans. Scholz’s Social Democrats and the Greens are calling for more measures to compensate consumers for rising inflation and energy costs, but Lindner, who leads the pro-business Free Democrats, has shown resistance to additional spending programs.

On top of the country’s regular budget, the government also launched a special off-budget defense fund worth 100 billion euros earlier in 2022 that will be split over several years. In an interview with German television on Tuesday, Scholz said Germany plans to spend 70 billion to 80 billion euros on defense annually.