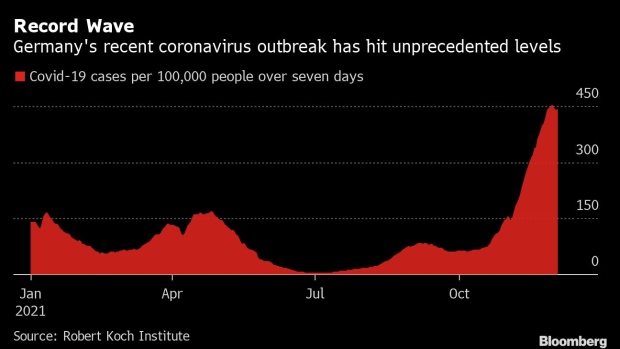 Visitors wear face masks while visiting a Christmas market in Frankfurt, Germany, on Monday, Nov. 22, 2021. Chancellor Angela Merkel said the latest surge in Covid-19 infections is worse than anything Germany has experienced so far and called for tighter restrictions to help check the spread. , Bloomberg

(Bloomberg) -- Germany has a long battle ahead against the Covid-19 pandemic, a top health official warned on Friday, with pressure set to increase on intensive-care units even as infections show signs of peaking.

An apparent plateau in the number of new cases could partly be a result of overwhelmed local health authorities falling behind on testing, Lothar Wieler, the president of the RKI public-health institute, said Friday at a news conference in Berlin. He urged citizens to reduce social contacts and called for caution in interpreting the latest Covid data.

“We still have a long road ahead of us,” said Wieler, who was flanked by outgoing German Health Minister Jens Spahn. “It’s far too early to say we have reached a turning point, let alone forgo tougher measures, quite the opposite.”

Germany’s infection rate declined for three straight days this week before rising slightly again to 442.1 on Friday, a level Wieler described as “still much too high.”

With a fourth wave of the virus sweeping across the country, Chancellor Angela Merkel and her incoming successor Olaf Scholz on Thursday agreed with Germany’s 16 regional premiers on stricter nationwide curbs for people who aren’t vaccinated and paved the way to making Covid shots compulsory.

Only people who are inoculated or recovered will be allowed into restaurants, theaters and non-essential stores, while the vaccine mandate will go to a vote in the lower house of parliament in coming weeks.

Scholz said he expects the measure to pass, and Merkel -- who is stepping aside from politics next week -- said she also supports it.

“This decision came late -- unfortunately for many, too late,” Spahn said Friday in reference to the new curbs. “But at least the decision was made.”

Scholz’s Social Democrats are set to announce Spahn’s replacement on Monday, with Karl Lauterbach -- a professor of medicine who has taught at the Harvard School of Public Health -- one of the candidates tipped to get the job.