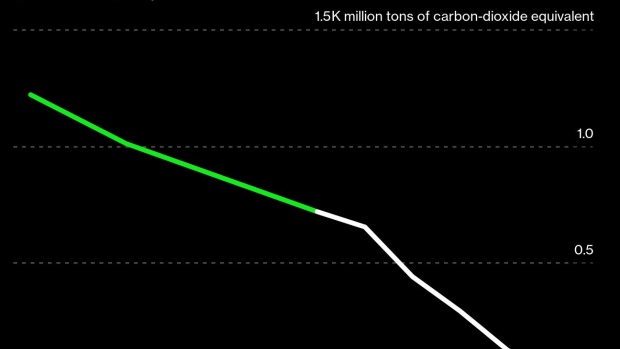 Annalena Baerbock, left, and Robert Habeck, co-leaders of the Green Party, during a news conference to present the details of the new coalition, in Berlin, Germany, on Wednesday, Nov. 24, 2021. Olaf Scholz is set to succeed Angela Merkel as German chancellor after forging an unprecedented alliance that aims to revamp Europe’s largest economy by tackling climate change and promoting digital technologies. , Bloomberg

(Bloomberg) -- Climate policies unveiled by Germany’s new coalition government underscored the challenges ahead for the Greens, who won the most governing power ever with support from voters demanding more action to slow global warming.

The deal ramped up efforts — already among the most ambitious in the world — to slash greenhouse gas emissions with a faster coal exit, more renewables and a carbon price floor. But the Greens also made a major compromise: construction of gas-fired plants will be accelerated to ease the transition away from coal. That means increasing reliance on a fossil fuel that’s prone to leaking methane, a super-warming greenhouse gas.

Germany’s new leaders didn’t raise the target for cutting emissions — set at a 65% reduction by 2030 from 1990 levels — though they said that the new measures will exceed the goal. The country needs to cut pollution by at least 70% by the end of the decade to be on a path to limit global warming to 1.5 degrees Celsius, according to nonprofit Climate Action Tracker, the stretch goal of the Paris Agreement and what scientists say is needed to avoid the worst impacts of climate change.

It’s positive that the deal boosts renewables and plans to compensate citizens for rising carbon costs, said Niklas Höhne, a partner at the research firm NewClimate Institute, but the government’s target floor of 60 euros per ton is too low and its declaration that gas will be “indispensable” during the transition to green energy is discouraging. “Small steps are not enough, fundamental changes would have to be made,” he said.

After nearly two months of intense negotiations, Olaf Scholz, the incoming chancellor from the center-left Social Democrats, presented the agreement with the Greens and the pro-business Free Democrats on Wednesday. The document ties up some loose ends left by outgoing Chancellor Angela Merkel’s administration, which had put the country on a path to simultaneously quit coal and nuclear generation.

A target to phase out coal by 2030, eight years earlier than planned, was made official. To take its place, 80% of energy demand will come from renewable sources by the end of the decade, up from a previous target of 65%. Renewable energy made up 40% the energy mix last year. About 2% of land will be given over to wind farms.

The coal commitment was “a long time coming,” said Lisa Fischer, program leader at climate change think tank E3G. “The date is absolutely achievable, and even if they hadn’t set this deadline, the transition would have naturally happened” as the dirtiest fossil fuel falls out of favor around the world. The bigger challenge will be attracting enough clean-energy investment to also wean the economy off gas as nuclear ceases to be an option.

It’s not clear where the new coalition stands on phasing out combustion engine cars. Leaders avoided setting a hard target for banning polluting vehicles, saying instead that they back the European Union’s goal of only selling “carbon-neutral” vehicles in Europe by 2035. It also vowed to support cars that can run on e-fuels.

The issue is particularly fraught in Germany, where the auto industry dominates and manufacturers have dragged their feet for years on electric vehicles — in part because of a strong car culture that favored traditional models. The country didn’t join a pledge at the COP26 climate talks earlier this month to only sell zero-emission vehicles by 2035.

Deciding not to ban fossil-fuel cars “sends the wrong signal,” said Franca Wolf, senior markets analyst at Verisk Maplecroft. “What is the advantage of having a clean electricity mix, if we still consume lots of fossil fuels for transportation?”