If Boris Johnson is finding it difficult to meet his promise to get Brexit done, the next stage of Britain’s departure from the European Union, the future trade agreement, is set to be even more tortuous.

“The biggest crisis of Brexit to date actually still lies ahead of us,” Ivan Rogers, Britain’s former envoy to the EU, said in a lecture at the University of Glasgow, Scotland, on Monday. “There are very big elephant traps here for the U.K. prime minister in 2020. He is currently digging them deeper.”

If Johnson wins a majority in December and parliament passes his withdrawal agreement in January, the clock will start ticking on an 11-month negotiation to determine Britain’s future relationship with its largest trading partner. The prime minister has ruled out extending the talks — so if no accord is reached by the end of 2020, the U.K. would crash out of the EU without a trade deal in place. 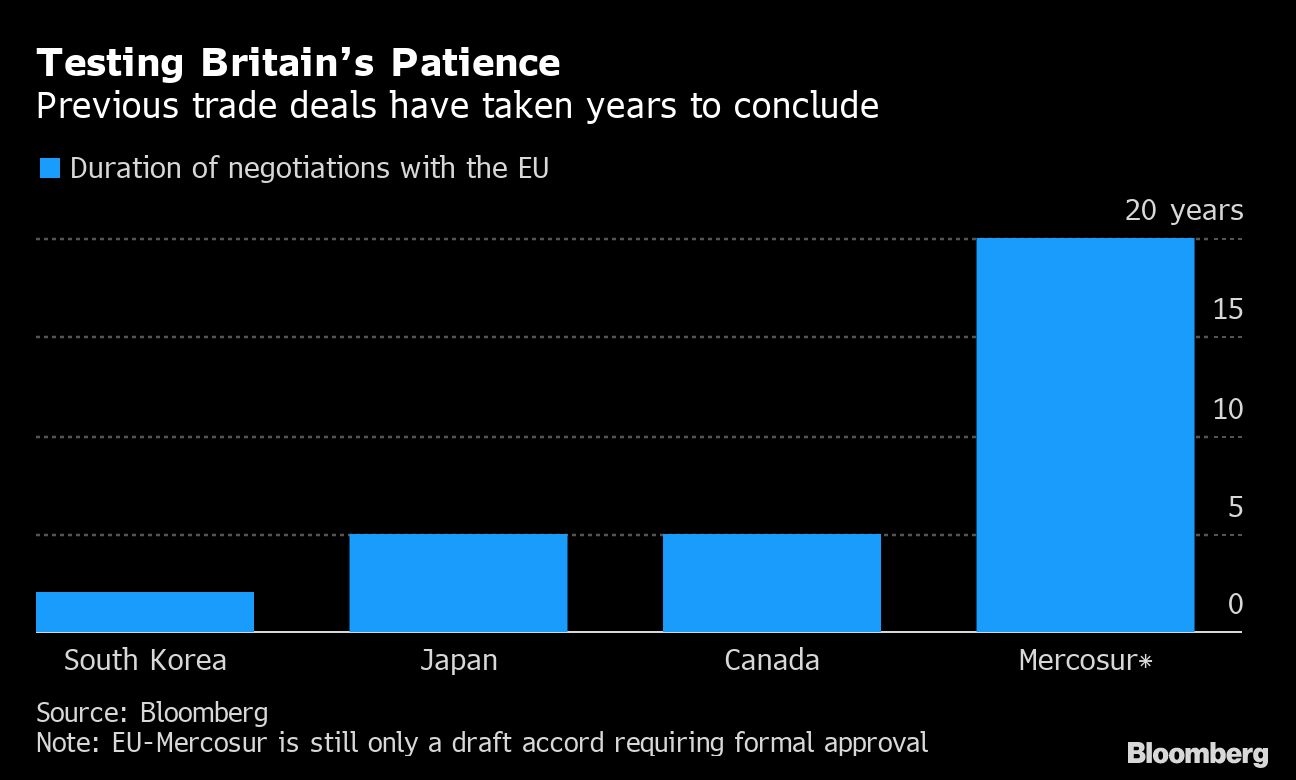 Johnson has made securing an agreement all the more difficult for himself by seeking a harder Brexit than his predecessor, Theresa May. The more he seeks to diverge from EU standards, the greater restrictions the bloc is likely to put on trade with Britain. Faced with another deadline, many expect Johnson will be forced to offer the EU concessions.

Johnson’s first problem is time. It took the EU five years to strike market-opening accords with Japan and Canada and 20 to get a deal with the Mercosur group of Argentina, Brazil, Paraguay and Uruguay. A deal with the U.K. would involve unpicking some 50 years of trade policy toward its closest neighbor.

“It’s a very demanding deadline,” Irish Finance Minister Paschal Donohoe said in an interview with Bloomberg Television in Berlin on Tuesday. “But, of course, the European Commission and the EU will be ambitious.”

The prime minister argues that the U.K.’s current economic ties with the EU will make the talks easy, but that close alignment will count for little, according to Rogers.“There is just no escape from balls-achingly technical and lengthy negotiations on rules of origin -- and much else besides -- if you deliberately leave your erstwhile trade bloc,” Rogers said. “There will be no new comprehensive trade deal without such provisions.”The limited time-frame means Johnson is likely to face a situation in late 2020 where, desperate to get a deal done to meet his self-imposed deadline, he will have to concede to an agreement that is tilted in the EU’s favor, Rogers said. Such a bare-bones deal would exclude services, which make up 80% of the U.K. economy and are its biggest export to the EU.

Another problem for Johnson will be getting European approval. Any deal will have to be ratified unanimously by the bloc’s national parliaments -- something that wasn’t the case in the earlier Brexit negotiations. Individual countries will want to defend their own interests: for both Spain and France, continued access to U.K. fishing waters is likely to be a key demand.

“It’s a process which won’t be in the U.K.’s hands,” said Joe Owen, Brexit Program Director at the Institute for Government, a London-based think tank. “No. 10 can’t, however much it might want to, play hard ball with the National Assembly in France.”

A third issue for Johnson will be regulatory trade-offs. Faced with the risk that Britain tries to turn itself into a lightly-regulated Singapore-on-Thames, the EU will likely limit access to its single market. Britain will then have to decide how far it is prepared to diverge from the EU’s environmental, labor and safety standards.

Then there’s Britain’s desire to strike a free-trade deal with the more laissez-faire U.S. The EU, which considers itself a regulatory superpower, will be on high alert for any U.K. moves that undercut EU standards, said Dmitry Grozoubinski, a former negotiator at the World Trade Organization. The EU is thus likely to seek legally-binding assurances on how U.K. rules will develop in future, Grozoubinski said.

“The EU won’t readily accept soft commitments on regulations,” he said. Recalling the Brexit campaign’s slogan of ‘Take Back Control,’ he added: “They’ve written divergence on a bus.”

--With assistance from Dara Doyle and Patrick Donahue.