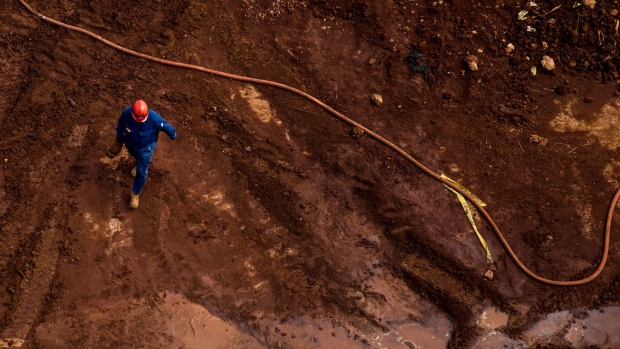 A worker walks toward a railcar dumper at a Noranda Bauxite Ltd. facility in Discovery Bay, Jamaica, on Friday, March 22, 2019. A revival of the bauxite mining industry is turning Jamaica's red earth to gold for a new set of investors from hedge fund luminaries to commodity traders. Photographer: Scott McIntyre/Bloomberg , Bloomberg

(Bloomberg) -- Ghana has picked Rocksure International as a strategic partner to build a mine and refinery in a bid to develop an industry out of its untapped bauxite reserves.

The Accra-based company will own a 70% stake in the project and the state-owned Ghana Integrated Aluminium Development Corp. will have the remaining 30%, according to an emailed statement Thursday.

Rocksure will lead the construction of a $200 million-bauxite mine at Nyinahin-Mpasaaso in central Ghana and a bauxite refinery of about $1 billion, according to Michael Ansah, chief executive officer of GIADEC. The mine is expected to produce 5 million tons of bauxite a year and create more than 1,000 jobs, according to GIADEC.

Ghana’s bauxite reserves are estimated at 900 million tons, with the potential to produce 10 million to 20 million tons a year, according to the state company founded in 2018 to create an integrated industry for the mineral. Bauxite is a reddish ore which has to be refined into alumina and then smelted to produce aluminum.

GIADEC is looking to partner private companies to develop infrastructure worth as much as $6 billion to leverage the West African nation’s bauxite. The $1.2 billion project is one of four for which GIADEC is seeking investors.