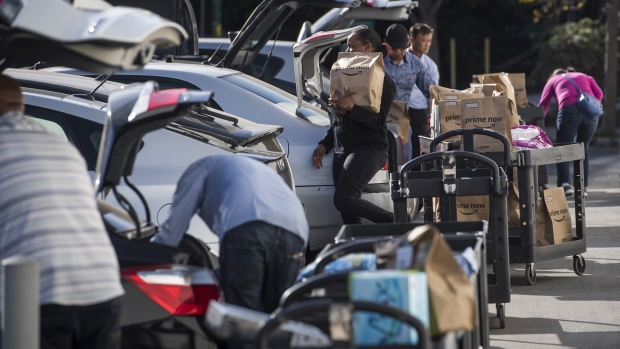 Drivers working for Amazon Flex load their cars with items to be delivered in San Francisco, on Oct. 30. , Photographer: David Paul Morris/Bloomberg

(Bloomberg) -- Here's an undeniable truth: The gig economy is built on the backs of workers who don't think about their costs. Uber drivers, for example, bring their own cars to work and pay their own expenses, but only some of them calculate their gasoline expenses and subtract that from their income. Savvier ones set aside their taxes along the way instead of just figuring them out at the end of the year. And the most diligent of all will calculate the depreciation of their car that's wrought by driving around all day, and toting drunk, sometimes vomiting passengers at night.

Many drivers, though, aren't doing the math. They're happy to bring in some money. And contemplating expenses is difficult and depressing. After all, if you're a skilled bookkeeper, there are probably higher paying jobs out there than driving for Uber or currying food for DoorDash. But it's only after thinking about all those costs that workers can really get a sense of their hourly wage—or realize that in many cases, it's much lower than advertised.

My colleague Olivia Zaleski has a story demonstrating this phenomenon. She spent time with Amazon Flex drivers—a category of Amazon workers that takes home far less than the company's promised $15 base pay for all workers, after accounting for expenses. The vast majority of people she spoke with said that they don't think about their costs, and the two workers who did try to think about it estimated that they earned less than the $7.25 federal minimum wage.

The piece is a case study in the unseen costs of working as an independent contractor in the gig economy. And it's not just a matter of keeping track of the money you're burning through doing the job, there's also the time spent waiting for an assignment. These workers get paid by the gig, not by the hour. It can be a bit like playing a slot machine: It's more fun to remember the times you won and the money you made, than the time in between.

But workers aren't dumb. And one good rebuttal to this critique is that eventually most people will at least look at their bank statement and get a general sense of whether they're making enough money. There's some truth to that. Even if drivers don't track all their expenses, they should see the big picture.

What happens once drivers start seeing how much money they're making? Well, 68 percent of Uber drivers quit within six months, according to a paper co-authored by the company's own chief economist. And now, with the unemployment rate so low, that number may well be getting higher.

Uber, for its part, is trying to give loyal drivers more reason to stay. The company announced a pilot program Thursday that will provide bonuses to highly rated drivers who put in the hours. A "gold tier" driver can earn 3 percent extra on Uber's time and distance formula used to calculate pay. Uber is even offering a free online college degree through Arizona State University for high-scoring drivers who complete more than 3,000 trips.

Giving some drivers a raise may sound like a win for the worker, but I think there's reason to be wary of Uber's motives here. Uber increasingly relies on gamification to motivate drivers. That's the idea that working means leveling up and getting rewards, like in a video game. It's similar to earning points on a credit card. There's a reason that credit card companies do that: It abstracts away the actual cash amount, making it feel like you're earning more than you are.

Drivers already chased week-long bonuses with trip targets. Now, with Uber Pro, drivers will have an incentive to try to earn gold, platinum and diamond status. It seems nearly impossible for the average driver to try to back out the value of working more to earn higher status. And, of course, this discourages drivers from swapping to Lyft or another gig economy job when Uber's fares fall, because they're in the middle of chasing diamond status. If the need for complex expense accounting makes it hard to figure out how much workers are earning, chasing rewards only complicates the matter further.

But a backlash could be brewing. In California, the Dynamex ruling in April—which extended protections for independent contractors—gave pro-labor forces a reason for optimism. And the gig economy could still be unwound entirely if the courts decide that those workers are actually employees.

As Uber and Lyft prepare for public offerings next year, the companies' legal relationship to their workers should be among their top concerns. The chance seems high that these, and other companies, could become the target of regulation once the government does its own math.

Apple shares took a hit after the company gave a lackluster forecast for the holidays and, in a departure, said it would stop reporting unit sales of iPhones, iPads and Macs.

Amazon will stop emailing popular Washington Post stories to customers, the company said. The move looks like an attempt to distance Jeff Bezos's company from his journalistic side project.

Peter Thiel reiterated his support for Donald Trump on Thursday at a conference. Thiel also defended Trump's use of nicknames which he called not "that nasty," but rather "powerfully accurate."

Global leaders will gather in Singapore for the inaugural New Economy Forum Nov. 6 - 7.The event, set up by Michael Bloomberg, founder and majority owner of Bloomberg LP, aims to solve the world's biggest challenges through coalition building, analysis and expert perspectives. Join the community by watching livestreams of the panel discussions and follow Twitter, Facebook and LinkedIn for the latest information.

To contact the author of this story: Eric Newcomer in San Francisco at enewcomer@bloomberg.net

To contact the editor responsible for this story: Anne Vandermey at avandermey@bloomberg.net