Too early to say if new coronavirus treatments will work

Gilead Sciences Inc. stock jumped as much as 7 per cent on Thursday, reaching a two-year high, as a Piper Sandler analyst doubled down on his call on the approval prospects for the biotech company’s experimental therapy for the pandemic now sweeping the U.S.

Analyst Tyler Van Buren renewed his call for positive results from the biotechnology company’s experimental therapy for the novel coronavirus. It was his second favorable call on the medicine in less than 24 hours. “It should get approved ASAP,” he told clients in a Thursday note.

Gilead defied Wednesday’s market rout, closing up 6.6 per cent, after Van Buren said in a separate note yesterday that Gilead’s remdesivir “could be approved for Covid-19 very soon” following results for a similar medicine developed by Fujifilm Holdings Corp. That came before Van Buren spoke to Gilead management, strengthening his conviction that the drug will yield positive first results when reported in mid-April. 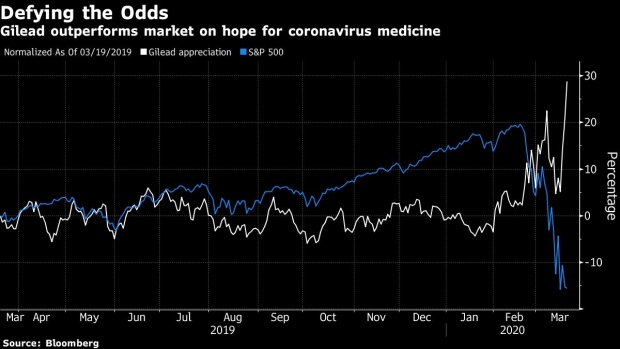 Van Buren’s call is unusual on Wall Street and goes against the history of drug development for pandemic treatments which has been fraught with failure and not proven profitable for drugmakers. Even more bullish analysts, like RBC’s Brian Abrahams, who rates Gilead outperform, have said that the drug has a slim chance at succeeding. Van Buren plans to revisit his US$70 price target and neutral rating as remdesivir’s future becomes clearer. The medicine was previously tested in Ebola, and studies of the drug are underway in China.

Even if remdesivir yields positive results and secures regulatory approval, its IV administration could impede broad use, especially at a time when hospitals are expected to be overrun. Gilead may also face hurdles mass producing a medicine. Van Buren acknowledged the difficulties, but said the company is looking for global partners as it gears up to produce millions of doses.

The Street is keeping a close eye on Gilead, which is seen as furthest along in developing a new medicine for the disease. Other drugmakers, including Johnson & Johnson, Pfizer Inc. and Regeneron Pharmaceuticals Inc., are also racing for new treatments.

“The company doesn’t expect to profit off of the ongoing, tragic pandemic, but if COVID-19 does reoccur year after year as we fear, it could be a billion-dollar sales business,” Van Buren said, suggesting sales could reach US$3 billion.