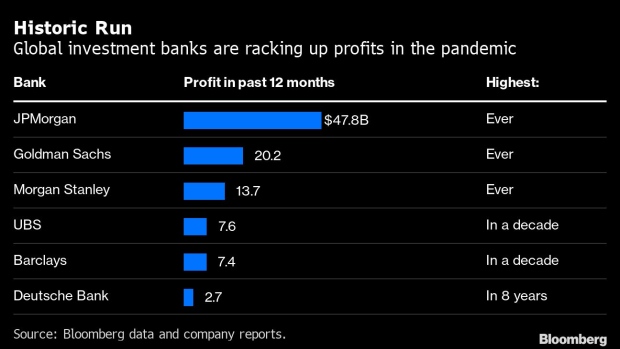 As the dust settles over earnings season, a total profit of more than $170 billion from a dozen of the biggest firms in the past four quarters shows how far the industry has come from the frazzled early stages of the pandemic. JPMorgan Chase & Co. was the standout, earning the equivalent of $131 million a day.

A string of trading wins certainly helped the sector in the early days of Covid-19, and as last year’s market volatility faded, investment bankers were ready to fuel the boom in takeovers and fundraisings via special purpose acquisition vehicles. Banks with wealth and asset management units enjoyed buoyant equity markets as the world economy began to recover, aided by unprecedented government support programs. The same trend also proved a boon to retail units, long seen as a drag on earnings, as they started to unwind loan loss provisions.

Goldman Sachs Group Inc. and Morgan Stanley also broke their profit records, while European counterparts UBS Group AG and Barclays Plc posted their highest earnings in a decade as the likes of Deutsche Bank AG and Societe Generale SA credited the improving world economy for boosting their business. Banking stocks reflect this strong run of results, with the Dow Jones U.S. Banks Index up 59% over the past year and the Eurostoxx Banks Index up 56%.

Elevated markets activity benefited traders who were once out of favor at Deutsche Bank and Barclays, while JPMorgan’s investment bank posted its best quarter in history thanks to dealmaking and advisory fees.

This upswing in corporate activity mirrored optimism in many parts of the global economy after months of Covid restrictions. In turn, banks felt confident enough to start unwinding vast reserves built for an economic meltdown that hasn’t arrived. In Europe alone, the top nine banks reported an 88% decline in provisions in recent weeks.

“All of the banks we rate in the U.K. and Europe are still holding back material reserves for expected credit losses given the remaining uncertainty,” said Laurie Mayers, associate managing director at Moody’s Investors Service in London. “The more positive outlook for major economies including house price inflation is, however, driving pressure on banks to release provisions.”

Some lenders such as HSBC Holdings Plc are using their extra headroom to reward shareholders, as central banks start to relax limits designed to promote lending during the pandemic. “We definitely feel more confident,” Chief Financial Officer Ewen Stevenson said on Bloomberg Television. “We will keep buybacks under review” together with dividends, he said.

With the pandemic still blazing in several regions of the world and rock-bottom interest rates weighing on banks’ lending income, it remains to be seen if the industry can continue breaking profit records. Investors may cast a skeptical eye toward the reserve releases that have flattered earnings in recent quarters, yet they “are a function of the underlying macroeconomy and underwriting acumen,” according Jefferies analyst Joseph Dickerson.

“Some of the revenue trends may sustain themselves, particularly as fee income continues to recover and whilst large scale writebacks may not repeat we continue to believe that consensus estimates for credit costs are too conservative,” said Dickerson.

Susannah Streeter, senior investment and markets analyst at Hargreaves Lansdown, said in a note after HSBC’s earnings that the investment banking upswing could be subsiding, having supported lenders through the lean months for retail banking.

“Given the frightening twists the global economy has had to deal with due to the emergence of new variants, the worry is that there could still be monsters lurking under the bed,” she said.