A surprise U.S. drive to overhaul international corporate taxation promises a new era for governments to capture a bigger tax take from some of the most successful global businesses -- if only the rest of the world can agree.

Representatives leading the negotiations, led by the Organization for Economic Cooperation and Development, said this week they can see an agreement by mid-summer. 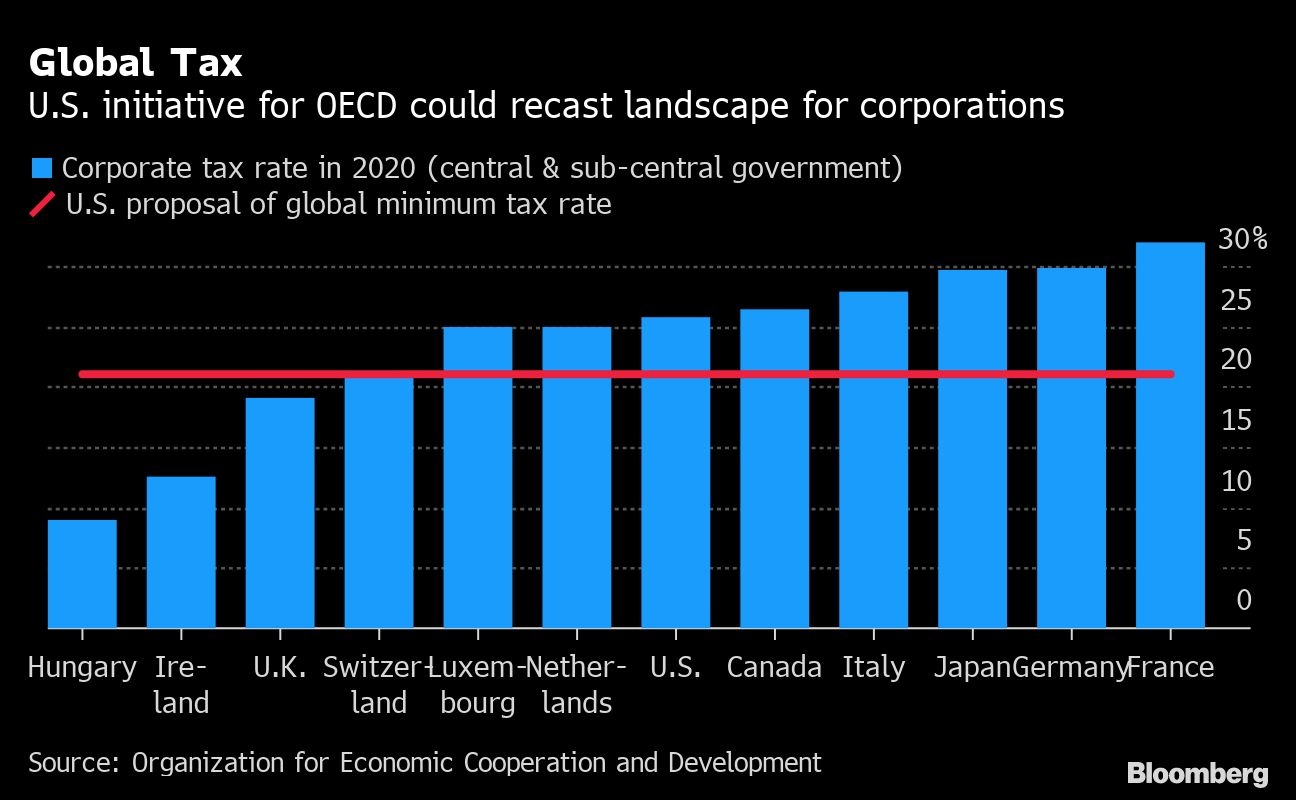 American proposals address two objectives: setting a 21 per cent global minimum tax and ensuring that the world’s 100 or so biggest companies pay more in places they actually do business. While questions remain over enforceability, dispute resolution and how poorer economies could benefit, the initiative re-injects momentum into a process that nearly sparked a trade war in the era of Donald Trump.

“Tax is a major financial question and a question of sovereignty. And what is on the table is a real tax revolution,” French Finance Minister Bruno Le Maire told reporters on Thursday. “If we get an historic agreement on global tax, we will have global companies and global taxation that is fairer and more effective.”

Reimagining international taxation has long been a frustrated ambition of finance ministers such as Le Maire. Borderless corporate entities have racked up mountains of barely taxed profits at a time when workers’ wages have stagnated -- stoking political tensions.

Getting more than 135 countries with their own priorities and tax systems to sign on to a standardized set of rules on corporate levies is a massive challenge. It would also mark a stark reversal of what Yellen called a “race to the bottom.” The average statutory corporate-tax rate among OECD members slid to 23.3 per cent by 2020 from 32.2 per cent in 2000, according to the Treasury. Back in 1980, OECD statutory rates “were rarely less than 45 per cent,” the Treasury said Wednesday.

Behind the new drive is a pandemic that swelled national debts. The shift is not unlike the regime change toward treatment of income-tax havens such as Switzerland that followed the 2008 financial crisis.

“I see it as completion of work we started 10 years ago,” said Pascal Saint-Amans, director of the center for tax policy at the Paris-based OECD, who has headed the talks. “It puts an end to the craziness where you could reduce your tax burden legally, massively, and in complete contradiction with the spirit of the law.”

The U.S. initiative has prompted a warmer reception from larger countries such as France, whose Treasury coffers have the most to gain by capturing revenue from global companies operating in lucrative domestic markets. Other nations that earn money from hosting multinationals have reservations.

“You have groups of countries with different interests,” said Robert Danon, a professor of tax law at the University of Lausanne, who is also chairman of the Permanent Scientific Committee of the International Fiscal Association. “You have big countries like Germany and France, but you also have small countries like Luxembourg and Switzerland, which have of course a different perspective.”

Luxembourg Finance Minister Pierre Gramegna expressed enthusiasm in a Bloomberg TV interview, while saying small economies such as his will want their own views to be taken into consideration. Ireland, with a 12.5 per cent corporate rate that has made it a destination for global investment, has expressed reservations.

“The proposals of the Biden administration go in the right direction.” -Pierre Gramegna, Luxembourg finance minister

“The principle of a global minimum effective tax rate, we do have reservations.”-Paschal Donohoe, Irish finance minister

“I am in favor of the proposal for a global minimum corporate tax rate.” -Jan Tore Sanner, Norwegian finance minister

“We are eager to learn further details.” -Dutch finance ministry

“That gives us hope that by the summer we will be able to reach a global agreement.” -Nadia Calvino, Spanish finance minister

“We think we can stomach what’s being discussed.” -Ueli Maurer, Swiss finance minister

“The proposals the U.S. are making are judicious and interesting.” -Bruno le Maire, French finance minister

“We will look closer at these proposals.” -Magdalena Andersson, Swedish finance minister

“The U.S. administration deserves a lot of praise for having thrown itself into the fight.” -Morten Bodskov, Danish tax minister

“In principle it seems to us a very good idea, in particular to improve the grave problems of evasion at international level.” -Matias Kulfas, Argentinian production minister

Le Maire said that one of the biggest hurdles to the U.S. proposals may actually be the U.S. itself -- in the form of the need for congressional approval of whatever deal the Biden administration signs. “We’ve had enough cold showers in recent years to remain cautious,” he said.

President Joe Biden’s plan to boost the domestic corporate tax rate to 28 per cent, impose a 21 per cent global minimum tax and close other loopholes to prevent avoidance of levies is supported by many Democratic members of his party. But the idea has been universally panned by Republicans and many business groups -- who say it would make the U.S. less competitive. Some Democrats are seeking less aggressive measures, something that could complicate a bill getting through Congress given the party’s razor-thin margins of control.

According to the OECD, changes to how taxing rights are allocated could redistribute around US$100 billion, while the minimum-tax pillar, combined with existing U.S. rules, would boost global revenues for governments by as much as US$100 billion a year. Saint-Amans reckons the U.S. minimum-tax proposal would make the increase “significantly above” that. A 21 per cent levy would be notably above other proposals that have hovered around 12.5 per cent.

The Biden administration has also floated a compromise proposal for the other pillar of the negotiations -- to consider a company’s profitability in determining whether more of its income should be taxed by the countries where it does business.

While technical analysis is still needed, Le Maire hailed it as a “positive and constructive proposal” that should include all the giant digital firms, as France had aimed for.

Aside from increasing national revenues and slicing up rights to tax big companies, one prize to be gained from an agreement is the avoidance of further damaging trade disputes.

“A minimum taxation level could prevent countries like France or Austria from rushing forward unilaterally, and tax sales of American digital companies -- which would be associated with high potential for conflict,” said Gabriel Felbermayr, president of Germany’s Kiel Institute for the World Economy.

What concerns observers less at this stage is the prospect corporations will simply redouble efforts to keep revenue away from national coffers.

“This project isn’t about loopholes any more,” said Christian Frey, deputy head of finances & taxes at Swiss business lobby economiesuisse. “The competition for high value-added activities will continue anyways -- maybe just not via the instrument of taxation but by other means. You won’t be able to prevent it.”