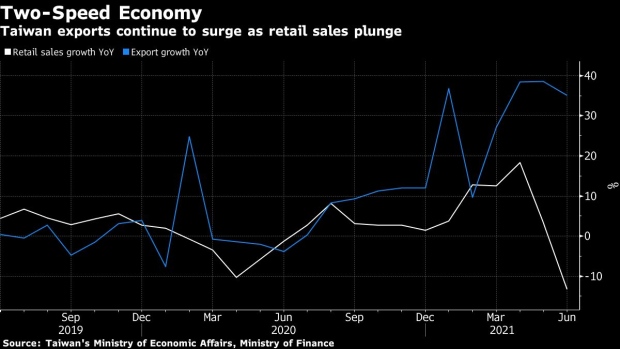 Gantry cranes at the Port of Keelung in Keelung, Taiwan, on Wednesday, April 28, 2021. Taiwan is scheduled to release gross domestic product (GDP) figures on April 30. , Bloomberg

(Bloomberg) -- Strong second-quarter results from Taiwan’s biggest exporters have underscored the island’s two-speed economy: While many of its major technology and shipping companies are seeing near-record revenues, the service sector is struggling to overcome Covid restrictions.

Taiwan’s 10 biggest companies that make a majority of their revenue from overseas, including technology, shipping and plastics companies, saw strong gains in revenue last quarter. Chipmaker MediaTek Inc. reported a 86% jump in sales Tuesday, while shipping company Evergreen Marine is likely to see sales surge 129%, according to the median estimate in a Bloomberg survey of analysts.

Near-insatiable demand for Taiwan’s electronic components and plastic widgets is the main driver of what’s expected to be a fourth straight quarter of strong gross domestic product growth. Data due Friday will likely show the economy grew 6.65% in the second quarter from a year earlier, according to a Bloomberg survey of economists.

“We are optimistic about the second quarter and second half of the year due to strong exports and growing investment numbers, especially investments by companies in the semiconductor industry,” said Angela Hsieh, an economist at Barclays Bank Plc. “These two factors can make up for the loss in private consumption, and we see second-quarter GDP likely surprising to the upside.”

The generally positive outlook comes despite the drag from domestic consumption after the government imposed a soft lockdown in May to curtail Taiwan’s first major Covid-19 outbreak.

The retail and hospitality sectors have borne the brunt after the government shut down all entertainment and recreation venues and barred in-house dining. That led to the island’s highest unemployment rate in more than a decade and record numbers of workers on unpaid leave. While health authorities have eased the rules for restaurants, local governments in Taipei and the surrounding area continue to restrict them to takeout services.

Private consumption is unlikely to recover to pre-Covid levels until mid-2022, DBS Bank Ltd. economist Ma Tie-ying wrote in a report Wednesday, pointing to Taiwan’s relatively low vaccine coverage and the risk of another outbreak in the fall and winter that could lead the government to tighten restrictions again.

“In general, GDP growth in the second half of the year will still be driven by exports and manufacturing industries, while the overall economy will likely see a two-sided picture,” she wrote.