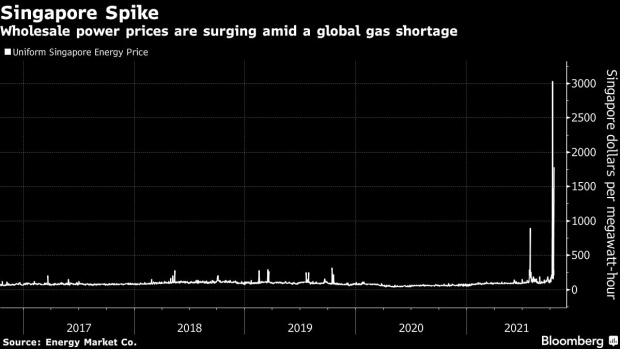 (Bloomberg) -- A record-breaking spike in electricity prices is short-circuiting Singapore’s efforts to liberalize its power sector, in the latest sign that the global crisis is delivering a blow to both energy suppliers and their customers.

The surge in wholesale electricity prices is erasing profits for many independent retailers in Singapore, according to James Whistler, the global head of energy derivatives at Simpson Spence Young, which brokers electricity futures. “There is clearly a gas shortage that is causing issues, pipeline capacity is low and LNG supplies might not have been coming through either.”

Singapore is the latest victim of a global fuel shortage that has sent power prices rallying in the U.K. and triggered widespread electricity curtailments in China. Suppliers that aren’t hedged against the volatile price moves can end up having to buy energy at a much higher cost than they have sold to customers.

The threat to the industry is similar to what has been happening in the U.K., where several smaller energy providers have gone out of business as they struggle to cope with a rally in gas and power prices. Despite a shortage of gas, there is still enough to provide electricity to consumers in Singapore. ISwitch said that service wouldn’t be interrupted.

Nonetheless, the development complicates Singapore’s effort to liberalize its power sector in a bid to boost competition. From November 2018, the government allowed all consumers across Singapore to pick power providers, resulting in a proliferation of independent retailers to rival the state-run utility. The departure of smaller players will give consumers fewer choices and potentially higher monthly bills.

Singapore’s Ministry of Trade and Industry earlier this month advised households to conserve electricity as fuel prices have skyrocketed.

Singapore generates nearly all of its electricity with imported natural gas, either via pipeline or liquefied carrier. While spot prices for liquefied natural gas are trading at a record high, Singapore has been largely insulated from the rally due to its dependence on long-term contracts, which are primarily linked to the price of oil.

However, record-high LNG spot rates appear to have started boosting Singapore’s power futures contracts through the next year, according to SSY’s Whistler.

“It seems clear that based on where spot prices are, where the futures prices are trading, LNG benchmarking has made its way into Singapore,” he said. “That’s a shift from where I think Singapore thought they were.”