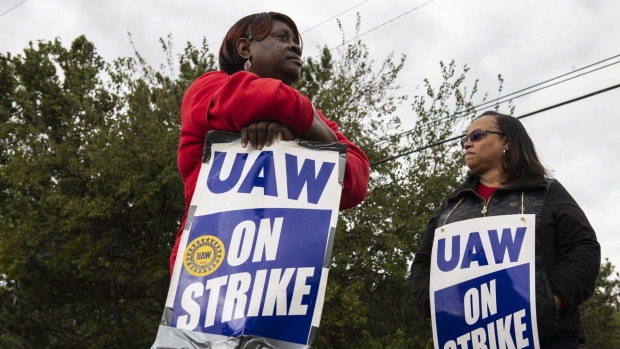 A UAW strike at the GM plant in Romulus, Michigan. Bloomberg/Brittany Greeson , Bloomberg

The United Auto Workers will continue its strike against General Motors Co. until a tentative deal is ratified by its full membership, extending their walkout for at least another week.

Voting on the agreement will begin Oct. 19 and ballots will be due by Oct. 25, Brian Rothenberg, a union spokesman, said during a press conference in Detroit. The strike began Sept. 16 and has cost GM an estimated US$2 billion.

The union’s local presidents and chairman -- roughly 200 officials -- met Thursday after being called to Detroit earlier this week when the two sides began to make major progress hammering out a four-year contract. After reaching a tentative agreement on Wednesday, the UAW released highlights of the accord on Thursday. The contract notably doesn’t throw a lifeline to GM’s Lordstown assembly plant in Ohio.

The proposed agreement shortens the length of time temporary employees need to work before converting to permanent status, an issue that was a major sticking point in the negotiations. It also offers staggered wage increases over the next four years and a US$60,000 buyout to as many as 2,000 eligible production and 60 skilled trade employees who retire by Feb. 28.

Even if fast-tracked, a vote could take a week to get all the ballots in and ratify the deal. At a cost of US$100 million a day in lost profit, that could be another half a billion hit to GM’s bottom line, based on calculations Bank of America Merrill Lynch analyst John Murphy made earlier this week.