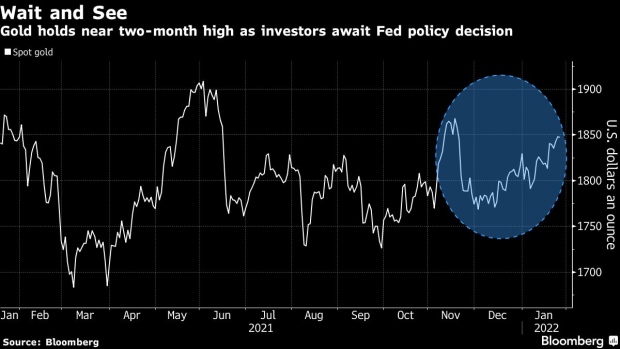 (Bloomberg) -- Gold held near the highest level in more than two months as investors waited for the outcome of a Federal Reserve meeting that could offer more clues on the outlook for monetary policy tightening.

Fed Chair Jerome Powell and his fellow policy makers are expected to signal their first interest-rate hike since 2018, setting the stage for a March move to cool red-hot inflation. The Federal Open Market Committee is all but certain to hold its benchmark rate near zero after the two-day meeting that ends Wednesday, while sticking to a plan to end its bond-buying program in March.

Bullion has risen more than 4% since the end of November as demand for an inflation hedge outweighed the end of the easy-money era. The risk of a Russian invasion of Ukraine and a cut in the International Monetary Fund’s world economic growth forecast for this year are also aiding the haven asset.

“Gold is rallying as investors run to safety over fears the Fed will aggressively tighten policy,” said Edward Moya, a senior market analyst at Oanda Corp. “Investors are still feeling jittery over a very tense Ukraine-Russia situation” and a whole range of inflationary issues, he said.

Spot gold declined 0.1% to $1,846.57 an ounce as of 7:37 a.m. in London, after rising to the highest intraday level since Nov. 19 on Tuesday. The Bloomberg Dollar Spot Index was steady. Silver dropped, palladium was little changed, while platinum rose.