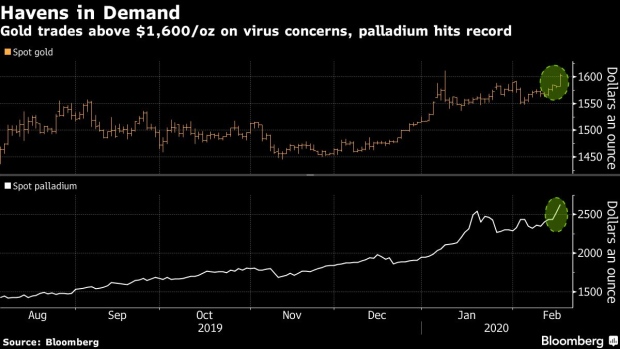 One kilogram bars of gold sit on a table at the Sharps Pixley Ltd. showroom in this arranged photograph in London, U.K., on Thursday, Jan. 18, 2018. Amid the wild Bitcoin ride that’s wiped more than 40 percent off the cryptocurrency's price in a month, a pattern may be emerging: sellers are switching out of digital gold and into the real thing. Photographer: Luke MacGregor/Bloomberg , Bloomberg

(Bloomberg) -- Gold traded near the highest level since 2013 on concerns over the spread of the new coronavirus and how it’s impacting global growth. Palladium continued it’s record-breaking rally.

Bullion steadied after surging 1.3% Tuesday’s as Apple Inc.’s warning that the virus and efforts to contain it would have its sales missing forecasts spurred a sell off in stocks. China’s death toll from the disease topped 2,000, while the province at the center of the outbreak reported fewer additional cases. The flight to safety has benefited haven assets, with the rally spilling over to the palladium market, where a multi-year deficit is expected to widen in 2020.

Gold is up 5.7% this year as investors assess the impact of the disease on economic growth and appetite for risk amid speculation that the Federal Reserve will feel increased pressure to reduce interest rates. The U.S. central bank has said the effects of the virus have presented a “new risk” to the outlook and traders will study minutes from the Fed’s latest meeting, due later Wednesday, for any hint of a dovish tone.

“A deficit equivalent to about 20% of the palladium market is expected to be sustained this year, helping explain the surge in prices,” said Vivek Dhar, an analyst at Commonwealth Bank of Australia. Demand is being driven by environmental regulations, particularly in China, which has increased palladium use in vehicles and should offset any recent weakness in car sales, he said.

Among other main precious metals, silver rose 0.5% and platinum advanced 0.7%.

To contact the editors responsible for this story: Phoebe Sedgman at psedgman2@bloomberg.net, Keith Gosman