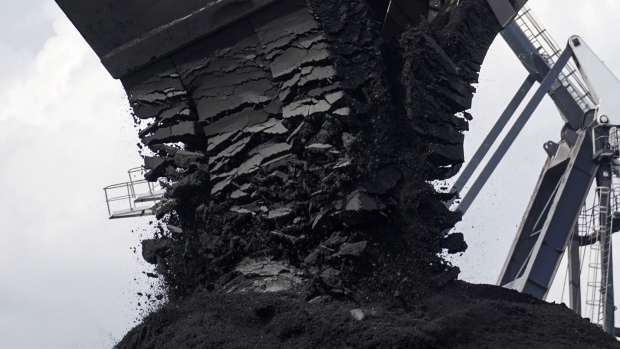 A crane unloads the first shipment of anthracite coal from U.S. supplier XCoal Energy & Resources LLC, for state energy firm Centrenergo PJSC, onto the dockside at Yuzhny Port, near Odessa, Ukraine, on Wednesday, Sept. 13, 2017. A Pennsylvania company will send 700,000 tons of coal to Ukraine in a deal the administration of President Donald Trump heralded as an important tool to undercut the power Russia has over its European neighbors. Photographer: Vincent Mundy/Bloomberg , Photographer: Vincent Mundy/Bloomberg

Benchmark Newcastle thermal coal will average $190 a ton in the fourth quarter, up from a previous forecast of $100, to meet demand in the northern hemisphere winter and taking account of a global rally in natural gas, analysts Paul Young and Hugo Nicolaci said Tuesday in a research note. The bank lifted its 2022 forecast to $120 at ton from $85.

Global coal exports from major producers were up about 8% in May and June, as a rebound in Indonesian supply was dimmed by lower output in Australia, South Africa and Colombia. Meanwhile, imports in the big importers including Japan, South Korea and China were up 16% in June. Newcastle coal rose to a record $177.50 a ton the week of Sept. 6, according to China Coal Resource.

The bank also lifted forecasts for coking coal used to make steel, with fourth-quarter prices now seen 48% higher at $230 a ton, while it raised its 2022 average by 13% to $175. Australian coking coal futures on the Singapore Exchange settled at $365.50 a ton on Tuesday, but Chinese steel production curbs should help ease prices toward the end of the year, Goldman said.