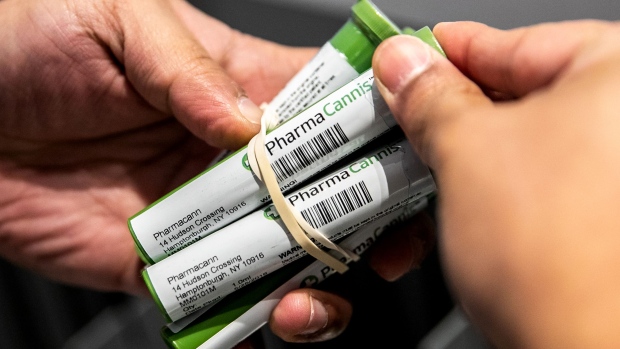 Mike Blum was supposed to revolutionize the way Goldman Sachs did business with the fastest-trading hedge funds. He ended up leaving for a marijuana startup.

Blum — one of several senior technology executives who departed the bank in recent days — is joining cannabis provider PharmaCann as its tech chief. It’s a bit of a departure from his previous role overseeing Goldman Sachs Group Inc.’s ambitious overhaul of an electronic-trading platform that the Wall Street firm hopes will win more business with quant hedge funds.

Blum had joined the bank in 2017 as a partner, a rare exception at a firm where the normal path to its highest rank is to spend years toiling away at the company. At PharmaCann, he will reunite with some of his former colleagues from electronic-trading firm KCG Holdings. The marijuana venture started a half-decade ago and says it provides “top-quality cannabis products to improve people’s lives.”

“We’re excited for Mike to be joining the PharmaCann team as our company continues to attract top-tier talent,” Brett Novey, PharmaCann’s chief executive officer, said in a statement.

The hire solves part of a mystery that unfolded last week inside Goldman’s biggest division. Blum and two more senior tech executives quit in the midst of overseeing projects key to the firm’s strategy, raising questions about what prompted the departures and what they might do instead. For Blum, the answer is that he’s leaving the industry.

Separately, the bank also lost Jeff Winner, the chief technology officer in its consumer-banking business, which the firm is looking to as a new frontier for growth. That unit includes Goldman’s credit-card partnership with Apple Inc. and its Marcus online-loan platform.

Winner was with Goldman for only two years after stints as a senior engineering executive at Silicon Valley heavyweights Stripe Inc. and Uber Technologies Inc.