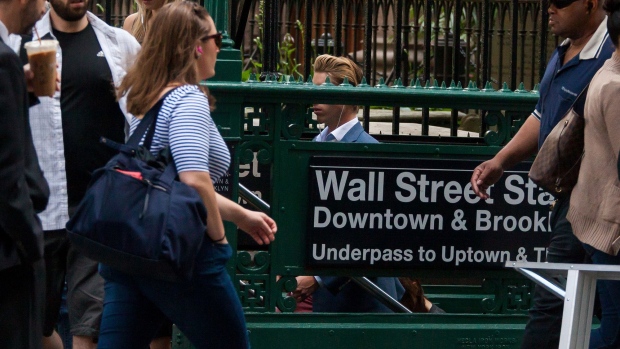 (Bloomberg) -- Wall Street is warning that more trade-war volatility is in the cards after conflicting headlines whipsawed global markets overnight.

U.S. stocks with outsized exposure to China are pricing in volatility of 1.4 times the average stock in the S&P 500 Index, according to a Goldman Sachs Group Inc. team led by equity derivatives strategist Vishal Vivek. That’s a lower premium relative to May or August, when the basket lagged the gauge by a substantial margin during risk-off episodes. Earlier this week, the cohort posted its biggest underperformance against the benchmark since the White House’s moves against Huawei Technologies Co. rattled markets on May 20.

“One-week implied volatility on stocks with high revenue exposure to China is only modestly above its average relationship with S&P 500 stocks, and has declined in recent weeks, despite the high significance of these negotiations,’’ they wrote.

The group highlighted a trio of chipmakers whose volatility appears particularly cheap to capture possible disruptions during U.S.-China trade talks or the scheduled imposition of additional tariffs on Oct. 15.

One week-implied volatilities for Advanced Micro Devices Inc., Teradyne Inc., and Micron Technology Inc. are all below their one-year averages, the strategists said. That’s even as the first two companies generate roughly 40% of their sales in China, while about two-thirds of Micron’s revenue comes from the world’s second-largest economy, they noted.

U.S.-China talks aren’t the only major event risk on the table, Macro Risk strategist Maxwell Grinacoff warned. Investors ought to make use of put-spread structures that also capture the potential for risk aversion during the third-quarter earnings season, upcoming Federal Reserve meeting, Brexit deadline and October’s jobs report, he said.

To contact the reporter on this story: Luke Kawa in New York at lkawa@bloomberg.net

To contact the editors responsible for this story: Jeremy Herron at jherron8@bloomberg.net, Rita Nazareth, Dave Liedtka