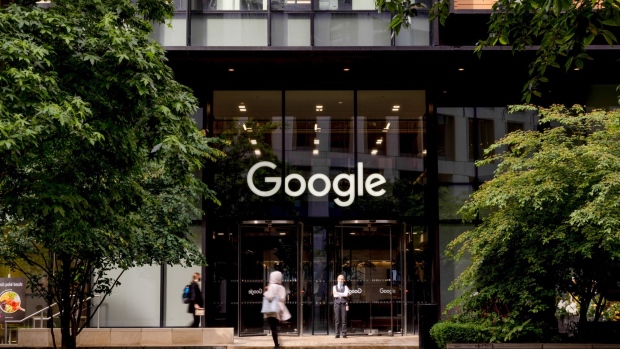 The Google office on the King's Cross Central development in London, U.K., on Monday, July 12, 2021. In a news conference on Monday, U.K. Prime Minister Boris Johnson is widely expected to confirm that mandatory curbs will end as planned as England approaches so-called "Freedom Day" on July 19. , Bloomberg

(Bloomberg) -- Alphabet Inc.’s Google said it would spend $1 billion to buy up its own London offices, keeping a major presence in the U.K. capital at a time when firms wrestle with how to manage employee work habits.

The purchase and renovation of the Central Saint Giles complex it moved into in 2011 are being undertaken as the company finishes construction of its giant new U.K. headquarters in the King’s Cross area, replete with a three-lane swimming pool, massage rooms, and a host of exercise studios.

The latest purchase is a bet by Google that tech workers, who have been among the keenest to work from home, will want to move back into the office -- at least temporarily. Google said in a statement Friday that it will refurbish the offices to add more flexible working space for teams rather than busy floorplans.

In August last year, Google approved 85% of employee requests to work remotely or relocate once its offices fully re-open. The search engine expects about 60% of its staff to work in the office a few days a week, with about 20% able to apply to work permanently from home.

Google’s discussions to buy the Central Saint Giles property were reported in October.

Demand for trophy London office buildings has held up during the pandemic even as firms continue to juggle how to manage the return to office life. Businesses committed to 819,000 square feet of new office space in the six months through September, according to British Land Co. That’s the equivalent of more than 10 soccer fields and includes a new headquarters for law firm Allen & Overy at the developer’s 1 Broadgate developmen and space to Facebook-owner Meta Platforms Inc.

Google has also been trimming office space in the U.K. capital. In June last year parent firm Alphabet Inc. said it would close its seven-story hub devoted to helping startups in London’s Shoreditch district and replace it with virtual services following the shift to home-working.

“Google expanding its U.K. base is one more success story in a golden age for the U.K. tech industry, which has just seen another record-breaking year of growth and investment,” Nadine Dorries, the U.K. secretary of state for digital, culture, media and sport, said in the statement. Friday.

Google said it intended to be able to accommodate 10,000 employees across its U.K. sites once all ongoing construction and renovation projects are complete. There are currently more than 6,400.