Google parent Alphabet Inc. rallied Monday to breach US$2 trillion in market value for the first time, fueled by a rebound in spending on digital ads and growth in its cloud business.

Its Class A shares gained as much as 1.2 per cent to hit an all-time high before paring the advance to close up 0.1 per cent and just short of the mark. Alphabet is the top performer this year among the five biggest U.S. tech stocks by sales, with a 70 per cent advance fueled largely by the growth in Google’s advertising business.

The share-price gain puts the company in an exclusive club alongside Apple Inc. and Microsoft Corp., the latter of which also reached the US$2 trillion milestone this year. The Google parent hit US$1 trillion in value for the first time in January 2020.

“It’s just a number, but I think it demonstrates that these are leading companies,” Kim Forrest, founder and chief investment officer at Bokeh Capital Partners, said in an interview. “It really is that simple -- that the market rewards their growth, and their prospects for growth, with big valuations.”

Bulls see the stock rising further because of its cheaper valuation and higher growth rate than most of its megacap peers. 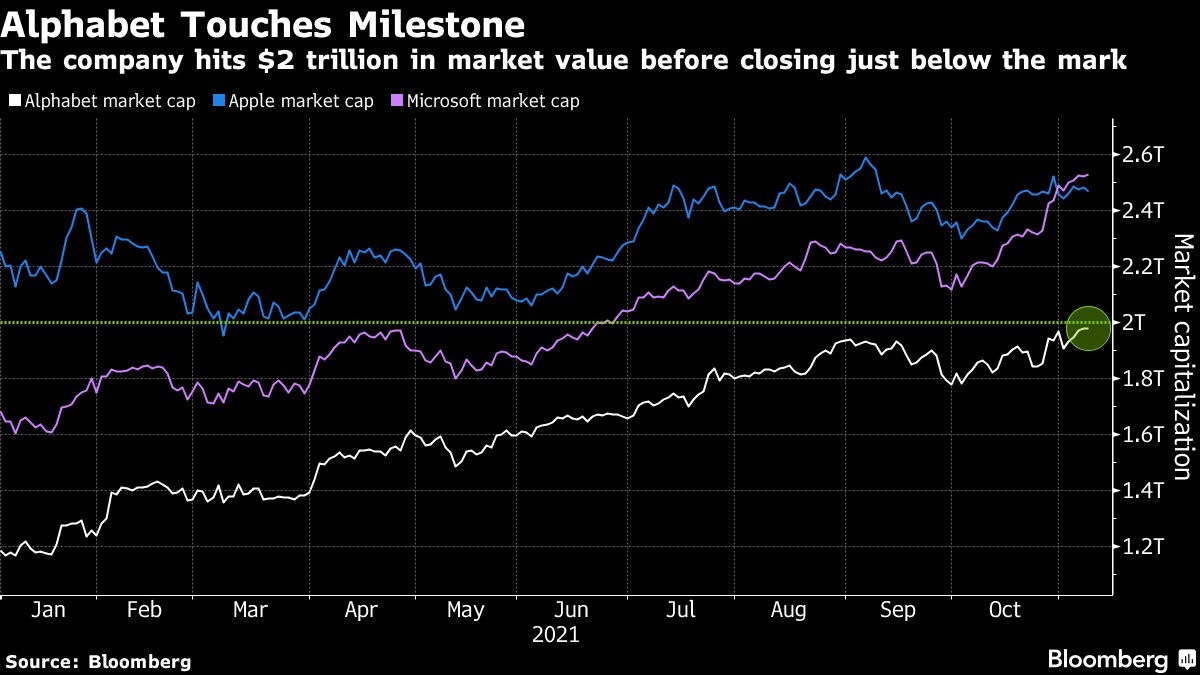 Alphabet trades around 24 times forward earnings, making it cheaper than Amazon.com Inc. and Microsoft, but more expensive than Facebook parent Meta Platforms Inc. RBC Capital Markets analyst Brad Erickson said arguments can be made around whether the stock’s multiple is already baking in enough optimism, though he remains positive on Alphabet and said it is “crowded for a reason.”

Alphabet is a near-unanimous favorite on Wall Street. Of the 49 analysts tracked by Bloomberg who cover the stock, all but one recommend buying Alphabet shares. The average 12-month price target for the stock is US$3,321, which suggests a 11 per cent return from its current share price.

“Given the especially attractive COVID rebound exposure, ever-rising YouTube engagement and monetization, and GCP’s march toward profitability, we see solid reasons to own the name,” Erickson wrote in an Oct. 26 note, referring to the Google Cloud Platform.

Alphabet reported third-quarter sales on Oct. 26 that beat analysts’ estimates, reflecting robust advertiser spending. Alphabet’s results were “some of the most impressive” seen in recent years in the face of meaningful headwinds, Evercore ISI analyst Mark Mahaney wrote in a note.

Alphabet’s future share-price gains will be driven by continued earnings growth, according to David Kalis, partner at Future Fund LLC. He said the stock is the second-largest position in the Future Fund Active ETF.

The company’s earnings per share are expected to reach nearly US$130 in 2023, the average of analyst estimates compiled by Bloomberg show, or close to triple the US$44 EPS reported in 2018. Kalis said he views Alphabet’s cloud division as the area of business that is most underappreciated by the market.

“Its cloud segment seems to be hitting a sweet-spot amid recent enterprise wins while Waymo could add another catalyst for expanding its total addressable market in the medium to long-term,” Bloomberg Intelligence analyst Mandeep Singh wrote in a message, referring to Alphabet’s self-driving car division.

Matt Peron, director of research at Janus Henderson Investors, said short-term traders may look to take some profits after the stock’s climb.

“Anything could happen in the short run, so it may not be as strong over the next three months,” he said in a phone interview. “Over the next three years, however, we really like it and will continue to hold it.”