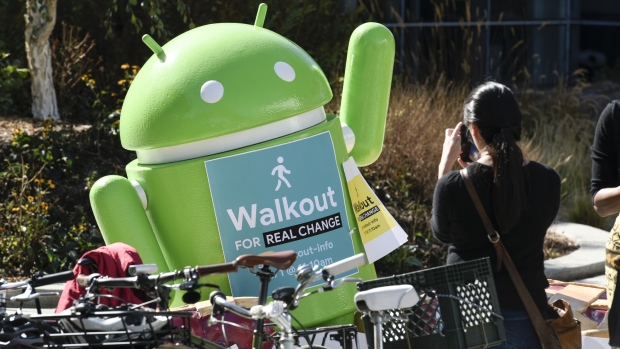 Outside Google headquarters in Mountain View, on Nov. 1, 2018. , Michael Short/Bloomberg

Over the past year, employees at Alphabet Inc.’s Google have protested over worker rights, a military contract, and the handling of sexual misconduct. Now, along with shareholders, they’ve written a resolution to Alphabet’s board, calling for reform in areas including racial and gender diversity, and asking the board to consider tying these metrics to executive bonuses.

“The tech diversity crisis threatens worker safety, talent retention, product development, and customer service,” the shareholder resolution states. It also criticizes the treatment of contract staff and asks the company to address the displacement of poorer residents where it buys real estate.

“We believe executives are out to lunch on several key social risks facing the company,” said Pat Tomaino, director of socially responsible investing for Zevin Asset Management LLC, who collaborated with the employees. His firm is the lead filer of the shareholder proposal. Talking to employees and community activists and following headlines about Google, he said, “it’s a picture of unmanaged risk.”

The resolution claims Alphabet “has not responded adequately to key demands” made by workers in a massive walkout in November, such as adding a worker representative to its board and ending forced arbitration for its entire workforce, rather than only for direct employees and only for cases of alleged sexual harassment or assault. It also asks the board’s compensation committee to look into including “sustainability metrics”—such as executive diversity— into its bonus system or stock vesting protocols. Similar policies are in place at Microsoft Corp., Intel Corp., International Business Machines Corp. and other companies.

"We're working hard to make Google more representative and build an inclusive workplace where employees feel respected, supported, and valued,” a company spokeswoman said in an emailed statement. “We report our progress extensively every year, including hiring and attrition rates across lines of race and gender."

A handful of employees worked on the proposal with the workplace activism group Coworker.org and the union-backed coalition Silicon Valley Rising. Along with Zevin, Boston Common Asset Management, Trillium Asset Management, and the Friends Fiduciary Corporation are some of the co-filers. Last month they sent the resolution to Alphabet, the initial step in the Securities and Exchange Commission's process for shareholder proposals. The filers intend to have a Google employee present the resolution at Alphabet’s shareholder meeting later this year.

“If shareholders say that this is something that is a priority, it’s signaling to the company that they have to take action, and that they can no longer just wait and see and just take small steps,” said Silicon Valley Rising’s campaign director Maria Noel Fernandez.

The proposal is similar to one raised at last year’s shareholder meeting. Google employees attended the meeting to demonstrate support for it, and one presented it on behalf of Zevin. It failed. The company said in a filing last year that the proposal would not “enhance Alphabet’s existing commitment to corporate sustainability,” noting that Alphabet chief executive officer Larry Page collected a salary of only $1. Alphabet Chairman John Hennessy said at that shareholder meeting that the company would consider diverse candidates for its board, and Google’s human resources head Eileen Naughton said the company aimed to increase its share of black, Latino and female workers by 2020.

The new resolution’s sponsors say they are hopeful that the past year’s headlines will help them secure stronger shareholder support this time around, but they acknowledge that a resolution cannot pass without the backing of founders Page and Sergey Brin, who control voting rights through a special class of shares.

Those headlines include two episodes in just the past week in which employees spoke out against Google’s management. On January 24, workers at a company-wide meeting asked pointed questions about a recently-discovered 2016 memo in which human resources officials had brainstormed ways to reduce employee compensation without workers noticing. (Google declined to comment on the memo.) And employees behind the November walkout decried the news that, weeks after publicly embracing their activism, the company had quietly urged in an unrelated case that the National Labor Relations Board end a legal protection for workers organizing using their employee email system. A Google spokesperson said its request to the Labor Board was only one of many potential defenses it offered in response to meritless allegations being made against it, and did not constitute lobbying by the company.

“At this point, with so many other Googlers whose work I respect having left over diversity and ethics concerns, the only way I’m able to justify staying is that I still believe I can make a positive difference,” said senior software engineer Irene Knapp, who introduced last year’s resolution at the shareholder meeting and helped write this year’s. Google has always appealed to workers’ idealism to attract them to the company, Knapp said via text message. “If Google hopes to maintain that appeal, it needs to listen to those of us who are sounding the alarm about the mistakes that are happening.”