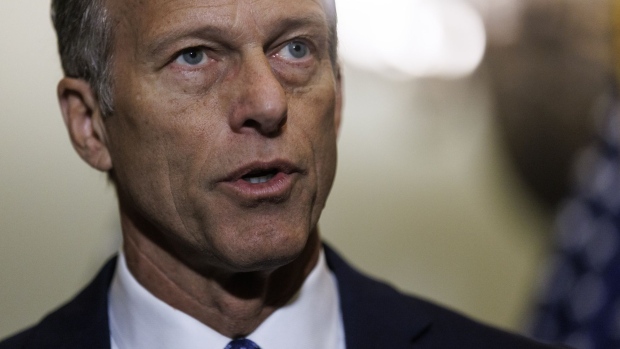 (Bloomberg) -- Senate Republicans want to leverage the next US debt limit increase to force cuts in projected federal spending and changes to Social Security and other entitlement programs, the party’s No. 2 leader said.

“There’s a set of solutions there that we really need to take on if we’re going to get serious about making these programs sustainable and getting this debt bomb at a manageable level before it’s too late,” Senator John Thune of South Dakota told a panel of Bloomberg editors and reporters in Washington.

Thune said Senate Republicans have a “long list” of priorities, including budget reforms, as they negotiate the limit on government borrowing before it’s reached sometime in the middle of next year. House Republicans including the likely next speaker, Kevin McCarthy, have said they would try to force fresh spending cuts from President Joe Biden and Democrats.

Democrats still control both chambers of Congress, but an effort to raise the debt ceiling this month before Republicans take power in the House has fallen by the wayside. That raises prospects for a debt limit crisis akin to 2011, which rattled financial markets and consumer confidence and led to the first-ever downgrade of the US sovereign debt rating by Standard & Poor’s.

Thune said there is a track record of big fiscal accomplishments under divided government, including a deal between President Bill Clinton and lawmakers to overhaul welfare programs. He said there could be big achievements next year, without a default on the debt.

The current debt limit is about $31.4 trillion. Lou Crandall, chief economist at Wrightson ICAP, said recently that if Congress doesn’t act, he expects the Treasury Department to run out of ways to avert a payments default by August 2023, though it could come sooner.

On spending, lawmakers could seek bipartisan accord on a deal placing new spending caps on the programs under Congress’s discretion similar to the 2011 deal that ended the debt-ceiling showdown, Thune said. That agreement allowed the debt limit to be increased by up to $2.4 trillion in two installments, and it was coupled with caps on discretionary spending, saving more than $2 trillion over 10 years.

On entitlement program changes, Thune said Congress should weigh an increase in the Social Security retirement age. But he didn’t rule out a deal that might simply start the process of making key changes, pointing to a proposal by GOP Senator Mitt Romney and others for a task force to examine what needs to be done.

“Even creating a process by which that gets dealt with would be progress and at least a baby step,” Thune said.