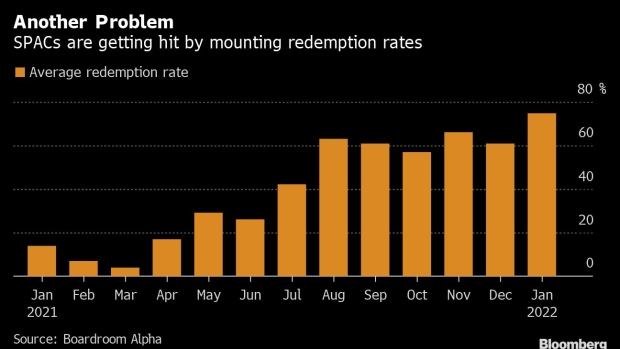 (Bloomberg) -- Sonder Holdings Inc.’s deal to go public by merging with blank-check firm Gores Metropoulos II Inc. left investors rushing to get out of their investments, showing the industry’s issues are hitting the most experienced sponsors.

The boutique apartment-hotel firm said in a filing Monday that 96% of the special purpose acquisition company’s shareholders opted to return shares for cash, the latest example of a problem for an industry that has been in free-fall.

The average redemption rate for investors sits at 75% this month, the largest amount in the past year and a stark contrast to a 14% rate a year ago, according to data from Boardroom Alpha.

“You expect 90-something percent redemption rate on a de-SPAC brought by a sponsor you’ve never heard of, but Gores is among the premiere sponsors,” says Matthew Tuttle, the chief executive and chief investment officer at Tuttle Capital Management. “The sentiment across the board is just awful.”

The ability to redeem common shares for the principal investment plus accrued interest limits investor risk and allows holders to bail on losing bets. It’s also a feature that enables arbitrage for investors who redeem shares and keep any warrants attached to a deal.

Sonder shares jump 13% to $8.04 at 10:37 a.m. in New York Tuesday, though they remain down 3.9% since the merger with the Gores SPAC was finalized last week. The stock’s 19% decline so far in 2022 is better than the weakness across companies that went public by merging with blank-check firms. The De-SPAC Index, which tracks 25 such companies, is down 28% in 2022.

The high redemption rate for the Sonder deal stands out for SPACs led by buyout specialist Alec Gores, who has seen less than one-fifth of shares redeemed across eight deals, data from research firm SPAC Insider show.

To be sure, the stock is trading well below its January 2021 debut price of $10, meaning investors would benefit from redeeming shares and buying stock at the lower prices.