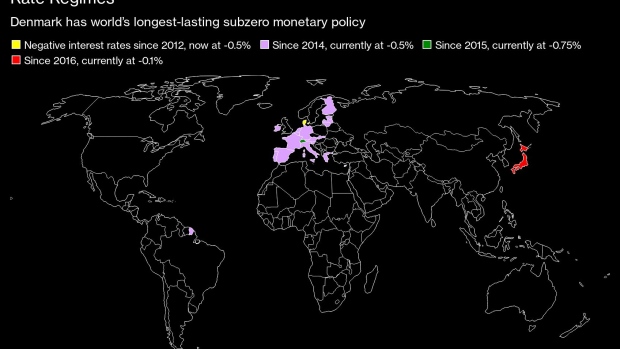 A cyclist and pedestrians make their way along a shopping street in Aalborg, Denmark, on Monday, Sept. 14, 2020. Denmark is re-introducing a number of coronavirus-related restrictions following the worst spike in infections since the height of the pandemic. Photographer: Cathrine Ertmann/Bloomberg , Bloomberg

(Bloomberg) -- The country with the longest history of negative interest rates just hit a milestone that may offer a glimpse of what’s to come elsewhere.

In Denmark, commercial banks have had to absorb negative rates since they were first introduced by the central bank in 2012. By 2019, the industry started sharing the cost of that policy with retail depositors. Today, Danes are the world champions in bearing the burden of negative rates together with their banks, with 35% of deposits affected.

Last week, the government in Copenhagen decided to step in. The minister in charge of bank legislation, Simon Kollerup, turned to social media to launch an attack on the financial sector, and the “greed” he said it represents.

“Banks have recently been lowering the bar for negative rates,” he said. “And this simply has to stop,”

He commented a day after Danske Bank, Denmark’s biggest lender, said it was following others in the industry and more than halving its threshold for imposing a rate of minus 0.6%. As a result, retail depositors with more than 100,000 kroner ($16,000) will pay 0.6% to park savings exceeding that amount with the bank.

“My worry is that banks will continue tightening the screws on negative rates so that average Danes need to pay to keep their money in a bank,” the minister said in a written comment to Bloomberg.

Kollerup, who summoned the bankers’ association to talks, says there’s no excuse for passing negative rates on to private customers, and rejects the idea that monetary policy plays a role in determining commercial bank rates.

The battle that’s now unfolding between Danish banks and the government gives a sense of where the limits of negative rates may lie, and shows that those limits might be political, not monetary.

Negative rates have become the lightning rod that Kollerup has seized to wage “a confrontation with greed, income inequality and division in society,” said Helle Ib, a political commentator at Borsen, Denmark’s biggest business newspaper.

The bankers’ association, Finance Denmark, has questioned the merits of Kollerup’s economic reasoning. And the central bank issued a reminder on Friday, pointing out that its negative policy rates (which are necessitated by the krone’s peg to the euro) influence deposit and lending rates throughout the broader economy. It also hinted that politicians shouldn’t interfere in the process. “Banks’ interest rates are a matter for them and their customers,” central bank Governor Lars Rohde said.

Carsten Egeriis, the chief executive of Danske Bank, points out that Danes also enjoy low interest rates on their mortgages, which he called “the other side of the coin.” That dynamic “most of the time far outweighs the cost of negative interest rates on the deposit side,’ he said.

Denmark is two years ahead of the euro zone, which first introduced negative rates in 2014. Jesper Rangvid, a professor of finance at Copenhagen Business School, says there are some lessons to be drawn from the Danish experience for euro-zone economies.

He also notes that negative bank rates aren’t the destructive force once imagined. In fact, Rangvid points out that after years of zero, and ultimately negative retail deposit rates, Danish deposits have continued to rise.

“The most important takeaway is that clients haven’t been leaving banks,” he said by phone. “That was the fear in the beginning, and that has not happened.”

Ib at Borsen says it’s not a given that Kollerup will actually intervene. Ultimately, it’s probably more a case of “sending a signal than a hardcore revolution of economic policy,” she said.