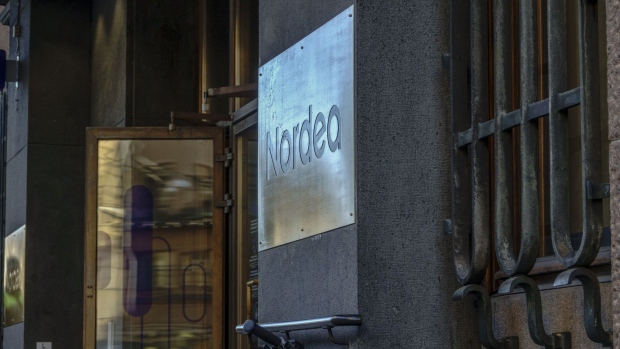 Solar panels on the roofs of residential property near the Niederaussem lignite fueled power station, operated by RWE AG, in this aerial photograph taken in Oberaussem, Germany, on Monday, March 15, 2021. Axa SA, France's biggest insurer, is dropping German energy giant RWE as a client in a decision that highlights how taboo the coal business has become. , Bloomberg

The biggest Nordic bank plans to reduce its holdings of oil and gas stocks. The largest French insurer dropped RWE AG as a client because of the German energy giant’s reliance on coal. HSBC Holdings Plc announced plans to scale back its lending to fossil-fuel companies following criticism from shareholders. And the European Union has introduced new rules intended to crack down on greenwashing by managers of investment funds.

All four of these decisions surfaced in the past week. While none may ultimately result in lower greenhouse-gas emissions, they are signs that Europe’s largest financial institutions are at the very least making the right noises about fighting climate change.

They’re certainly being more proactive than their counterparts on Wall Street. JPMorgan Chase & Co., Wells Fargo & Co., Citigroup Inc. and Bank of America Corp. continue to be the leading global financiers of the companies and industries most responsible for, and profiting from, the accelerating atmospheric catastrophe facing the planet.

But some observers are nevertheless optimistic that the reluctance of America’s financial industry to do more to slow global warming will soon fade.“While we’ve so far seen an earlier and more policy and regulation-driven response to the climate crisis in Europe, we expect the U.S. to pay increasing attention, especially in light of the new administration in the White House,” said Marie Freier, global head of ESG research at Barclays Plc.

In Finland, Nordea AB said it will restrict more than 200 of its funds that manage a combined 120 billion euros ($143 billion) from holding oil and gas stocks. To avoid being cut, an energy company must prove it’s on what Eric Pedersen, Nordea’s head of responsible investments, described as “a green transition path.” Shares of BP Plc, Royal Dutch Shell Plc, Equinor ASA and Total SE have already been sold off for failing to meet the criteria, according to the bank.

Scientists estimate coal use in electric-power generation must fall 80% below 2010 levels to limit global warming to 1.5 degrees Celsius above pre-industrial averages, which is the more ambitious target of the Paris Agreement.

HSBC ranks as Europe’s third-largest financier for fossil-fuel producing energy companies since the signing of the Paris accord in late 2015, data compiled by Bloomberg show. This prompted a group of the bank’s shareholders, including Amundi SA and Man Group Plc, to file a resolution in January requesting the London-based bank cut its support for the energy industry.

After at least two months of talks, the group withdrew its resolution when HSBC proposed its own, agreeing to disclose short- and medium-term targets for aligning its lending and underwriting with the Paris Agreement. The bank also said it intends to phase out financing for coal-fired power plants and thermal coal mining in the European Union and Organization for Economic Cooperation and Development member states by 2030, and then in the rest of the world before 2040. This all assumes shareholders back the company’s resolution at the May 28 annual meeting—and that if they do, HSBC follows through.

And finally in Brussels, EU lawmakers adopted new rules on March 10 to ensure that fund mangers don’t label funds as being environmentally compliant when they aren’t—that ubiquitous corporate practice of greenwashing.

By mandating greater disclosures, the Sustainable Finance Disclosure Regulation, or SFDR, is aimed at stamping out ESG mendacity among financial firms hoping to cash in on the booming market for such funds.

The expectation among those such as Marie Freier of Barclays is that more companies and investment firms (even those in the U.S.) will announce new initiatives ahead of the COP26 event in November in Glasgow, Scotland, where climate finance will be a central theme.

Still, the question is will these efforts result in a significant financial shift away from fossil fuels and a consequential drop in greenhouse-gas emissions, or just more greenwashing? Efforts by the EU and other regulators to police these green pledges may be critical to any success.

The clock is ticking. Indeed, time may already be up.

Bloomberg Green publishes the Good Business newsletter every week, providing unique insights on climate-conscious investing and the frontiers of sustainability.