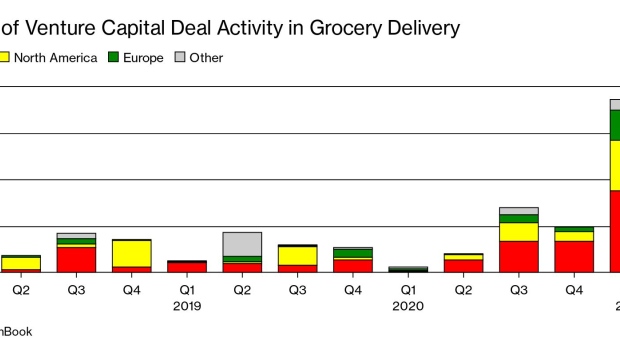 (Bloomberg) -- Cajoo is weighing options including a sale just six months after it started, people familiar with the matter said, after the fiercely competitive instant grocery delivery market forced the French startup to look for new ways to fund itself.

The company has spoken to rivals about selling itself, the people said, asking not to be identified because the discussions were private. Cajoo managers have also held talks with venture capitalists about raising new funds.

Ads for grocery deliveries in 15 minutes or fewer are cropping up across Europe’s biggest cities, spurred on by the coronavirus lockdowns that pushed customers to order food online more than ever. For Cajoo, which was touted as the first instant grocery delivery company in France, the high cost and intense competition of this industry means the company is going to need cash, and soon.

“In the end it’s about understanding what they’re potentially offering versus offers from VCs,” said Guillaume Luscan, the company’s chief operating officer and co-founder, when asked about potential talks with competitors. “All the options are worth at least taking a call, and then it’s basically about weighing what’s the best for Cajoo and what’s the vision.”

Luscan declined to comment about specific negotiations or how much the company is seeking in financing. A spokesperson said Cajoo is considering “a lot of financial possibilities,” because its business model will require it to raise more cash “in a very short time.”

Cajoo’s not the only one. Another U.K. delivery startup, Dija, is also exploring options including a sale, people familiar with the matter have said. Germany’s Gorillas has cut in half the valuation it is seeking in a new fundraising round, the Information reported.

While venture capitalists have poured billions into companies that promise to deliver fresh produce and other convenience goods to consumers within minutes, the way these businesses are run is expensive. To get bread and milk to a customer’s house in 15 minutes, Cajoo has to have a small warehouse close to its users, mostly in high-priced urban centers, that it keeps stocked with fresh food.

Cajoo says it charges supermarket prices and is trying to differentiate itself in part by paying its delivery drivers a salary. That’s because there’s a plethora of companies competing for their business. In central London alone, customers can choose from at least five such startups. Some better-funded competitors, including Germany’s Gorillas and the U.K.’s Zapp, are entering France while American companies eye European expansion.

“We’ve stayed away from these group businesses where everyone’s trying to do the same thing. It’s hard to figure out who the winners are going to be,” said Hussein Kanji, a partner at London’s Hoxton Ventures, which backed Deliveroo Plc. “What’s happening is they’re going back into the market and finding it really hard to raise capital because it doesn’t look like they’re the breakout.”

A parallel boom about four years ago saw venture capitalists invest heavily to fill city streets with electric scooters, only for some of the companies go bust or scale back their ambitions to achieve a sustainable bushiness model. The pandemic dealt those remaining companies a heavy blow.

While investors are spending seriously to take market share from traditional grocery stores, many of these businesses lose money and the market is increasingly competitive with large investors like DST Global and Mubadala backing competitors.

All that competition has raised early talk of consolidation in the industry and led to breakneck fund-raising cycles. Luscan also said Cajoo is speaking with traditional retailers about partnerships that could be “more or less strategic.”

“You need to expand quite fast to propose the service to new customers before competition does, and since competition is quite intense you need to be able to be quick,” Luscan said. “It’s a very capital-intensive activity and I think that’s why all the players are consistently discussing with inventors to make sure that cash will never be an issue.”