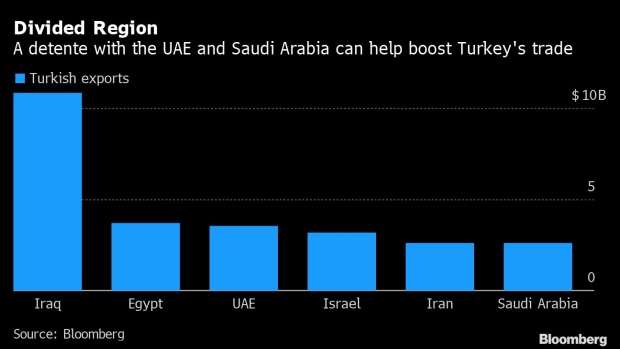 (Bloomberg) -- The United Arab Emirates and Saudi Arabia are holding out the possibility of better ties with Turkey that could benefit trade and security in a volatile region, according to people familiar with the strategy.

The moves are tentative given the backdrop of longstanding tensions and jostling for influence. They are also likely to fall afoul of the Gulf duo’s insistence that Turkey rein in support for the Muslim Brotherhood, the pan-Islamist group they label as terrorist but which Ankara views as a popular movement. But even limited progress could ease frictions over wider regional issues.

The outreach -- taking place both publicly and privately -- coincides with foreign policy reboots both in the Gulf and Washington. Saudi Arabia and the UAE recently ended a rift with Turkey’s ally Qatar over topics with similarities to their dispute with Ankara.

Turkish President Recep Tayyip Erdogan is also seeking to improve relations with the European Union. And Turkey, the UAE and Saudi all face a U.S. administration under President Joe Biden that is likely to be tougher on all of them.

Turkey and the UAE have discussed removing barriers to trade, a Turkish official said, adding the overtures encouraged a recent decision to restart flights between the capitals halted by the pandemic.

A person familiar with the Gulf position described the outreach as a process in its early stages. The Brotherhood issue is central to Gulf concerns and to their close ally, Egypt, the person added, speaking on condition of anonymity due to the sensitivities, as did the others familiar with the developments.

Turkish officials say there has been no direct or indirect outreach from Abu Dhabi and Riyadh that included demands for policy change toward the Brotherhood, but are aware that it’s a priority for Gulf states even if there is little room for diplomacy on that. Abu Dhabi and Riyadh view the movement as destabilizing and a threat to dynastic rule.

The starting positions are wide apart on other issues too. There are mutual accusations of meddling in internal affairs. They have lined up on opposing sides of Libya’s war and clashed on Syria, Egypt and Iraq. They’re also at loggerheads over Turkey’s search for energy in the disputed waters of the eastern Mediterranean Sea.

But the gesture is part of a more pragmatic and conciliatory tone in the Gulf for now. The UAE has described ending crises as part of its vision for the post Covid-world.

The export market is a strong bargaining chip. The UAE is Turkey’s second-largest trade partner in the Middle East after Iraq, with $8 billion in bilateral trade in 2019. Turkey exports a vast range of goods to the country, from precious stones to airplane parts.

Saudi Arabia, which supplies Turkey with oil and chemicals, is one of its top regional markets despite falling exports. Turkish businessmen complained last year Saudi authorities had stepped up efforts to block Turkish imports.

There has been cautious outreach in public statements. A senior UAE official said last month Turkey should “recalibrate its relations with Arabs” and that Abu Dhabi had no reason to be in conflict with Ankara.

Turkey’s foreign minister said Ankara had been talking directly with both Gulf nations but dismissed the idea of a quick deal, saying the UAE should abandon policies that run counter to Turkey’s interests.

Some of their sharpest differences are over Egypt, where the Gulf states backed President Abdel-Fattah El-Sisi in his 2013 overthrow of Islamist Mohamed Mursi, whom Ankara supported, while Brotherhood leaders have sought refuge in Turkey.

Another sticking point is Turkey’s investigation into the 2018 murder of columnist and critic Jamal Khashoggi by Saudi agents at the kingdom’s consulate in Istanbul.

“The ideological differences will continue and the conflicts will continue,” said Andreas Krieg, a lecturer at King’s College in London. Riyadh and Ankara could work together on building the Saudi defense industry, especially drones and other weapons, he said.

Erdogan, whom Biden derided as an autocrat in 2019, is also adapting to changing times. Krieg cited domestic pressure due to the pandemic, military overstretch abroad and EU problems.

“He needs to make concessions as well and he can’t choose to have more enemies.”