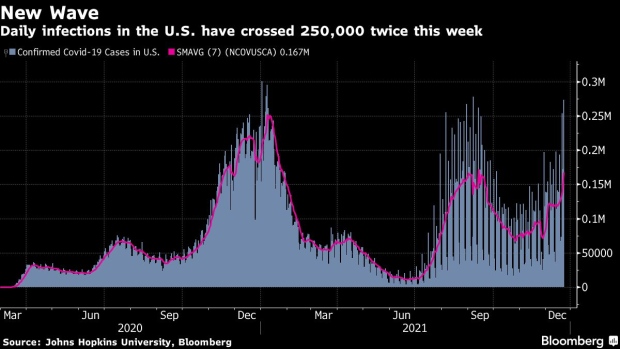 A line outside a Covid-19 testing site in Farragut Square in Washington, D.C., U.S., on Thursday, Dec. 23, 2021. President Biden said that the omicron variant of the coronavirus will result in more "breakthrough" infections among vaccinated Americans, "potentially in large numbers", but that they are unlikely to be severely ill. , Bloomberg

(Bloomberg) -- The Hong Kong government said an airport cleaner with no recent travel history has tested preliminary positive for Covid and is suspected to carry the omicron variant. The island’s previous imported cases of omicron all had prior travel history.

Merck & Co.’s Covid-19 pill was cleared by U.S. regulators, the second new treatment option approved in as many days in an expanding arsenal to fight the pandemic. But just like testing sites and vaccines, treatment pills will be in short supply for months until production can increase.

Australia has brought forward implementing third-dose booster shots for Covid-19 as the nation battles outbreaks of the omicron variant.

From Jan. 4, Australians will be be able to get their booster shot four months after receiving their second dose, from five months currently, Health Minister Greg Hunt said in Canberra. From Jan. 31, the time limit will be cut again to three months.

“These dates have been set out of an abundance of caution to give Australians early continued protection,” Hunt said. About 91% of Australians aged 16 and over have had two jabs, he said.

The Hong Kong government said a 64-year-old male airport restroom cleaner has tested preliminary positive for Covid-19 and is suspected to carry the omicron variant.

The patient had no recent travel history and mainly worked at a designated restroom used by preliminary positive imported case patients while they await transfer to the hospital, the Center for Health Protection said in a statement. Hong Kong has so far confirmed 34 imported omicron cases, and all had prior travel history.

In a blog post on Thursday, Waymo cited “quickly rising Covid-19 infection rates” but said its executives would participate in virtual events. Similarly, Intel said it will send only a small number of staff to the Las Vegas event and switch its participation to the internet.

An executive board member of Porsche AG, Barbara Frenkel, also canceled her plans to attend the conference scheduled to begin Jan. 5.

New York’s daily Covid-19 cases rose to 38,835 on Thursday -- nearly doubling in less than a week when the state broke the previous record of 19,942 new cases set in January, according to state data.

Of the 324,786 people who were tested, 12% were positive as the omicron variant washes over the state. Omicron comprised 62% of sequenced cases from New York between Dec. 9 and Dec. 22.

Hospitalizations aren’t rising as fast as cases but they are starting to climb steadily. Hospitalizations increased by 18% to 4,534 over the last week. Deaths have remained steady with about 60 New Yorkers dying from Covid per day.

The rock band Phish has postponed its four-night run of performances over the New Year’s holiday in New York City until April, citing concern about climbing Covid rates, Madison Square Garden Entertainment said in a statement.

The government has enough vaccine doses available to enforce the move, part of a wide range of measures from the banning of large religious processions to the shuttering of brothels issued this week. Currently, 12.4 million people, or 77%, of the target population have been fully vaccinated.

New York City is limiting crowds and adding more health and safety measures for revelers at the New Year’s Eve ball drop in Times Square amid a record surge of Covid-19 cases.

Mayor Bill de Blasio said the celebration will still be held but only allow 15,000 people in viewing areas. The city will require proof of full vaccination and mask-wearing.

Still, the mayor declined to cancel the event altogether, citing vaccination requirements to attend, the outdoor nature of the event and the precautions taken as adequate safety measures.

New Jersey reported 15,482 cases, more than double its previous record of set in January, while tests have surged amid holiday travel plans. The most densely populated U.S. state also counted 22 Covid-related deaths in hospitals and 33 earlier fatalities with a newly confirmed link to the virus. Just a day earlier, New Jersey had 9,711 positive tests.

Hospitalizations rose 28% from a week ago, to 2,241 patients. In April 2020, prior to vaccine availability, more than 8,000 Covid patients were in New Jersey hospitals.

France identified around 88,000 coronavirus cases in the last 24 hours, “the worst figures registered since the start of the pandemic,” BFM TV cited Health Minister Olivier Veran as saying.

Daily cases are likely to hit 100,000 closer to Dec. 25, Veran said during a visit to a vaccination center in Paris, according to BFM. France had expected cases to reach that level by the end of the month.

Morgan Stanley told employees who have to be in the office through the first two weeks of January to wear face coverings when not at their desks and limit large in-person meetings.

“This guidance applies to all locations (even those where everyone is fully vaccinated),” the New York-based bank said in a memo to staffers this week. “Masking is always encouraged for anyone who is at increased risk or who has a household member who is unvaccinated or at increased risk.”

A Morgan Stanley representative didn’t immediately respond to a request for comment.

Omicron appears to be less severe but more contagious than any other Covid-19 strain to date, the U.K. government said, as daily infections soared to another new record close to 120,000.

However, data from the HSA also showed that while a booster improves protection, it starts to wane more rapidly than with delta, and is 15% to 25% lower from 10 weeks after the third dose.

Italy recorded the highest number of coronavirus cases since the beginning of the pandemic. The first country in Europe to move into lockdown last year reported 44,595 cases on Thursday, up from 36,293 a day earlier. Patients in intensive care units rose by 13 to 1,023, still well below the peak of more than 4,000 last year.

U.K.  cases surged to a record for a second day, piling pressure on Prime Minster Boris Johnson as he considers whether to tighten pandemic regulations after Christmas.

A total of 119,789 new cases were logged on Thursday, according to data published on the government’s coronavirus dashboard. That’s more than double the rate seen at the start of the month, and an increase of more than 10,000 on Wednesday’s caseload -- which had been a daily record.

Another wave of Covid infections is taking hold in the U.S., powered by the fast-spreading omicron variant. On Wednesday, daily cases topped 250,000 for the second time this week, data compiled by Johns Hopkins University and Bloomberg show.

Even so, the hospitalization rate in the nation has been relatively stable in recent days. Preliminary studies from overseas show omicron may be less likely to land patients in the hospital than the delta strain.

Serbia detected its first omicron case on Thursday after health authorities said the strain will inevitably spread to the Balkan country. Serbia’s rate of new infections has been declining this month but the government has warned that another wave of Covid cases is possible.

Yale University is delaying the start of the spring semester and moving the first few weeks of classes online as the Covid-19 omicron strain spreads. The school’s spring break will also be shortened by one week.

After a relatively quiet start to the fall semester, several colleges including Harvard, Stanford and Duke have announced plans to begin the term starting in January online.

Merck & Co.’s Covid-19 pill was cleared by U.S. regulators, giving high-risk patients another at-home treatment option at a time when the omicron variant is causing cases to surge.

The drug, molnupiravir, received emergency authorization on the heels of Pfizer Inc.’s competing pill that was cleared Wednesday, Paxlovid. Together, the treatments promise to provide a new way to keep a sharp rise in infections from overwhelming U.S. hospitals.

Molnupiravir, developed by Merck with partner Ridgeback Biotherapeutics LP, is intended to treat Covid in non-hospitalized people 18 and older at risk of developing severe illness. A study showed it reduced the risk of hospitalization or death among adults with mild to moderate disease by 30%.

Slovenia decided to tighten virus measures before the holiday season, limiting the number of shoppers to 1 per 10 square meters, while banning public events and parities for New Year’s Eve. However, bars and restaurants will be allowed to operate without limit on Dec. 31 for guests with a fresh negative test. Private gatherings on Christmas and New Year’s will be limited to family members of up to three different households.

Germany may see 8,000 Covid-19 patients in intensive-care units simultaneously next spring, Spiegel magazine reported, citing calculations by the Max-Planck-Institut. Currently, the country has about 4,400 ICU patients with Covid, and 85% of all intensive care beds occupied.

U.K. Prime Minister Boris Johnson will wait until after Christmas to announce any new curbs.

Any announcement will not come until the week after Christmas, people familiar with the matter said Thursday, when the government will give a Covid-19 update regardless of whether Johnson decides to introduce new restrictions.

Two doses and a booster of the vaccine made by China’s Sinovac didn’t produce sufficient levels of neutralizing antibodies to protect against the omicron variant, a laboratory study found.

The vaccine, created by Astra and Oxford, saw neutralizing antibodies increase to similar levels as those after two doses against the delta variant with a booster shot, the company said. A third dose produced higher levels of neutralizing antibodies than those found in individuals who had recovered naturally from the alpha, beta and delta strains.