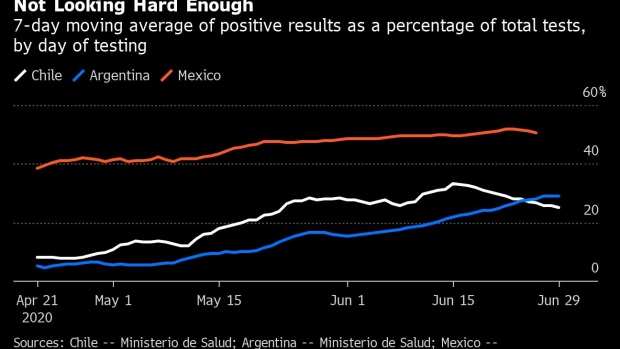 As nations around the world try to get their economies humming again, the number of coronavirus tests coming back positive has turned into the metric to watch. Five percent is the threshold to reopen safely. Ten percent is troubling, twenty percent outrageous.

The sky-high results are easy to explain -- though not so easy to fix. The Latin American nation has stubbornly shunned wide-scale testing and instead runs exams only on the sickest of patients. Deputy Health Minister Hugo Lopez Gatell in late May said anything more would be “a waste of time, effort and resources.”

Throughout the pandemic, Mexico and parts of Latin America have reported positivity rates that dwarf anything seen from China to the U.S., including new trouble spots like Arizona and Texas. With half of all tests coming back positive, Mexico ties only Bolivia for title of the world’s highest rate. In Argentina and Chile, almost 3 out of every 10 exams lead to a Covid-19 diagnosis. And in Brazil, where 1.4 million people have been infected, no one knows for sure because the government doesn’t release that data.

“You don’t want it to be that easy to find cases,” said Amesh A. Adalja, an infectious disease specialist at Johns Hopkins Center for Health Security. “They’re not trying hard enough.”

When rates are that high, it means governments don’t have a handle on how bad the outbreak is within their borders. In the U.S., where the positivity rate is creeping back up and stands at 8%, the Centers for Disease Control and Prevention said the true scale of the pandemic may be 10 times what tests show.

Officially, Mexico reported more than 226,000 cases as of Tuesday and 27,769 deaths. All tolled, Latin America has more than 2.5 million cases and accounts for about half of all new daily deaths globally.

What troubles many health professionals is that neither Mexico nor Brazil, Latin America’s powerhouses by economic might and population, have shown much willingness or ability to change the trend. Brazil President Jair Bolsonaro, who advocates jobs over lock-downs, mingled with large crowds of supporters last weekend, even picking up a little girl for photos. (Neither one wore a mask.) And Andres Manuel Lopez Obrador recently wrapped up a weeks-long tour across Mexico.

“Our purpose is not to count every case, but to use modern and efficient mechanisms to tackle the pandemic,” Lopez Gatell said in a Senate hearing in late May. On Tuesday, he said, “deaths in our country are associated with diabetes, hypertension and obesity.”

To be fair, in a region where more than a third of the population lives in poverty, most Latin American nations can’t afford to shut down fully or pass big stimulus packages to offset the fallout. Heading into the pandemic, the U.S. was capping its biggest economic boom ever while Latin America was mostly going backward. Argentina and Ecuador were mired in debt crises. Mexico had slipped into recession, while Brazil in 2019 logged its fourth straight year of unemployment above 10%. And then there’s Venezuela, whose collapse has sent a diaspora of millions across its borders.

There are signs the positivity rate may be falling in Chile, where the health ministry wants to get the level down to 10%. And Brazil’s Health Ministry last week launched a plan to test more than 20% of the population of 210 million people by year-end, although half of the exams will be so-called quick antibody tests, whose reliability is under debate in the medical community.

The World Health Organization recommends that countries should achieve test positivity rates at 5% or lower for 14 days before reopening.

“You need to be testing the mild cases,” Adalja said. “Those cases you’re missing are out there infecting people.”

The Latest From Across Latin America: