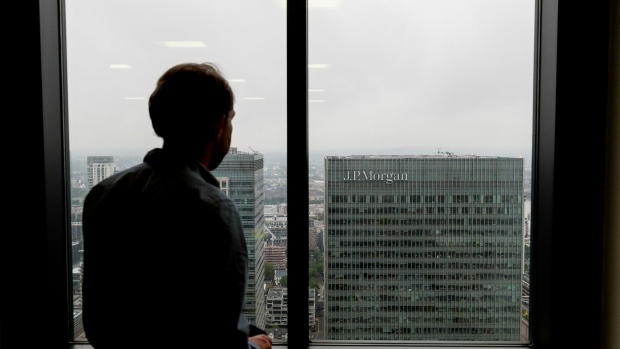 A man looks out of a window to the offices of JPMorgan Chase & Co. in the Canary Wharf business and shopping district in London, U.K., on Wednesday, May 17, 2017. JPMorgan Chase & Co. plans to move hundreds of London-based bankers to expanded offices in Dublin, Frankfurt and Luxembourg to preserve easy access to the European Union’s single market after Brexit, the firm's head of investment banking said earlier in May. Photographer: Simon Dawson/Bloomberg , Bloomberg

(Bloomberg) -- JPMorgan Chase & Co. is doubling the proportion of investment bankers coming in to its New York and London offices as Wall Street firms inch back toward normal work arrangements.

The increased presence starts Monday in London and Tuesday in New York, the person said. More than half the sales and trading staff are already coming into the London office, the person said. The details were earlier reported by Financial News.

Other banks are also starting to lay out plans for their workforces.

Citigroup Inc.’s Europe markets chief Leonardo Arduini hosted an online town hall with staff last week where he outlined plans for more workers to return to its Canary Wharf premises, especially in sales and trading, from Sept. 7, according to people familiar with the matter. It currently has around 20% of markets staff occupying its London office, one of the people said.