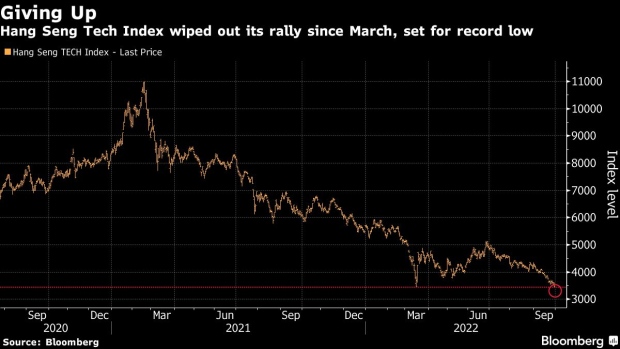 Risk-off sentiment has deepened for Chinese growth shares after the Federal Reserve hiked interest rates by 75 basis points last week and signaled further pain ahead. The selling is also part of a global market turbulence triggered by the weakness in the pound, as investors worry the UK’s dramatic tax cuts may further fuel global inflation.

The market tumble will be particularly jarring for authorities ahead of the Party congress meeting next month, a key twice-a-decade event. The CSI 300 Index, which is down more than 20% this year, is just 1.1% away from touching April 2020 lows.

Authorities have tried to restore a semblance of calm in financial markets amid slowing growth, a property market crisis and concerns about Covid Zero policy. Earlier this month, Chinese regulators asked several big mutual fund houses and brokers to refrain from large sales of stocks before the event, even though it’s done little to boost shares.

Meanwhile, many technology firms’ listing status in the US remains uncertain, with growing hostility between Beijing and Washington. US and Chinese authorities just had a tense start as they converged to discuss about reviewing audit work paper of the companies.