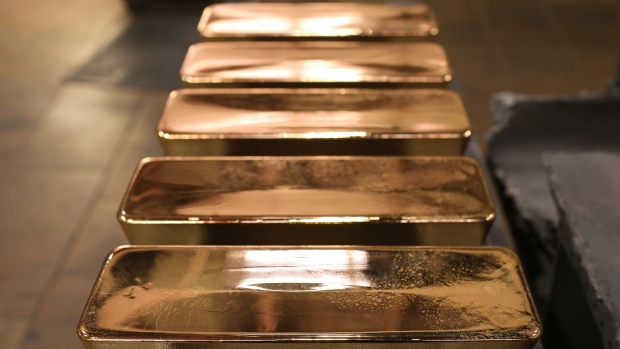 Forget plunging oil prices and a collapse in consumer spending. Some of the world’s most-prominent investors are raising alarm bells over the looming threat of inflation, and turning to gold for protection.

Money printing by central banks and vast state stimulus packages are rekindling interest in one of the oldest stores of wealth. It’s a revival of a trade that became popular in the wake of the 2008 crisis, as money managers piled into gold for similar reasons, but were ultimately disappointed as inflation was kept in check. Yet the unprecedented scale of the government response to the coronavirus crisis is feeding the argument that this time will be different.

Hedge fund luminaries including Paul Singer, David Einhorn, and Crispin Odey are among those bullish on gold, according to recent letters to investors. So are large asset managers like Blackrock Inc. and Newton Investment Management.

“Gold is the only escape from global monetising,” Odey wrote. Gold futures were the third-largest position held by his flagship Odey European Inc. fund at the end of March. “In the short term, the money will be made on the inflation bet.”

The logic is simple: the massive expansion of central bank balance sheets around the world must eventually dilute the value of their currencies — most importantly the dollar — leading to inflation of hard assets like gold. The price of the metal has already risen sharply this year, touching a seven-year high of US$1,751.69 an ounce on Friday. But some believe it has much further to go. 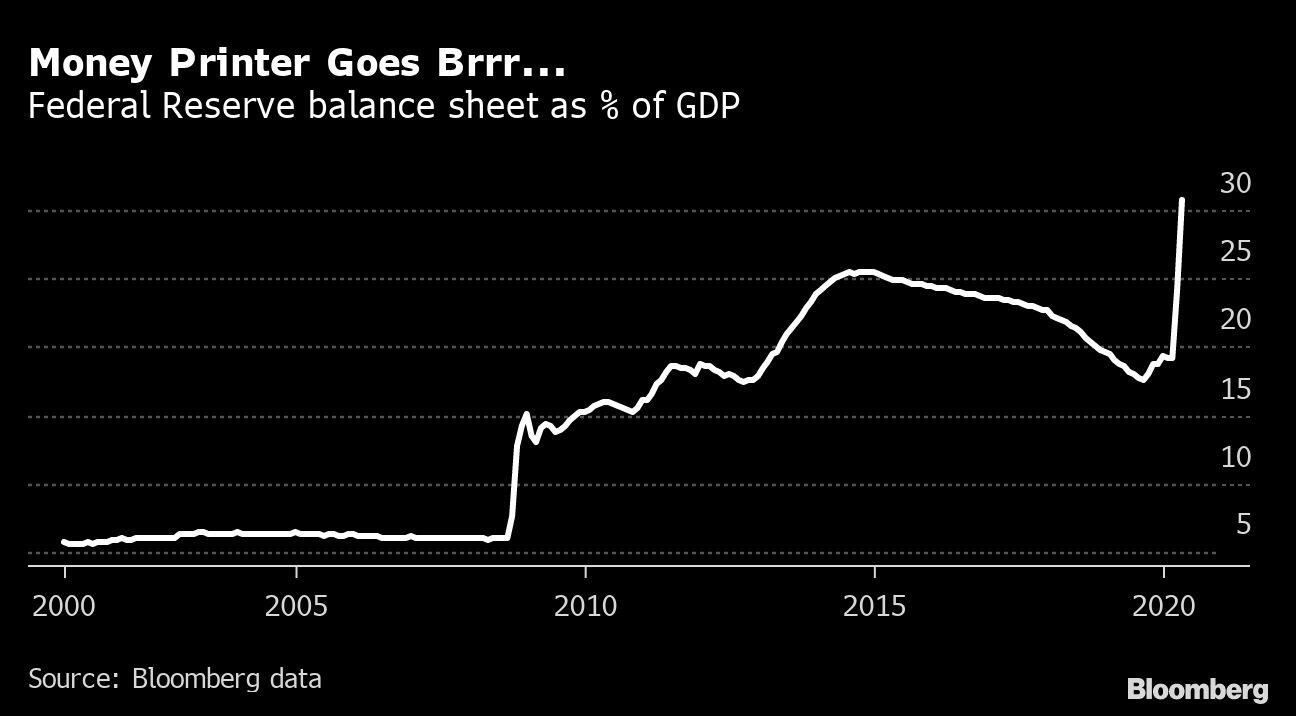 “In recent months, gold has gone up in price to some degree, but we think that it is one of the most undervalued investable assets existing today,” Singer’s Elliott Management Corp. wrote in a letter to investors in April. He argued that low interest rates, mine disruptions and “fanatical debasement of money by all of the world’s central banks” would lead gold to rise to “literally multiples of its current price”.

There’s just one problem: it’s a familiar investment thesis in the gold market, and last time it was tried, in 2008, it fell flat. The most prominent gold champion back then, John Paulson, predicted “massive inflation” and bet on gold as “the only asset that will hold value,” according to the 2009 book “The Greatest Trade Ever.”

While the bet was initially a profitable one — gold rose to a record of US$1,921.17 in 2011 — the high inflation Paulson predicted never materialized, and the gold market fell into a multi-year slump that weighed on his funds’ performance.

Today the gold market faces a similar debate. Despite the warnings, market measures of investor expectations are pointing toward lower inflation as the world undergoes one of the sharpest economic downturns in history. The U.S. five-year/five-year breakeven, a measure of medium-term inflation expectations, has fallen from around 1.8 per cent at the start of the year to 1.4 per cent now. 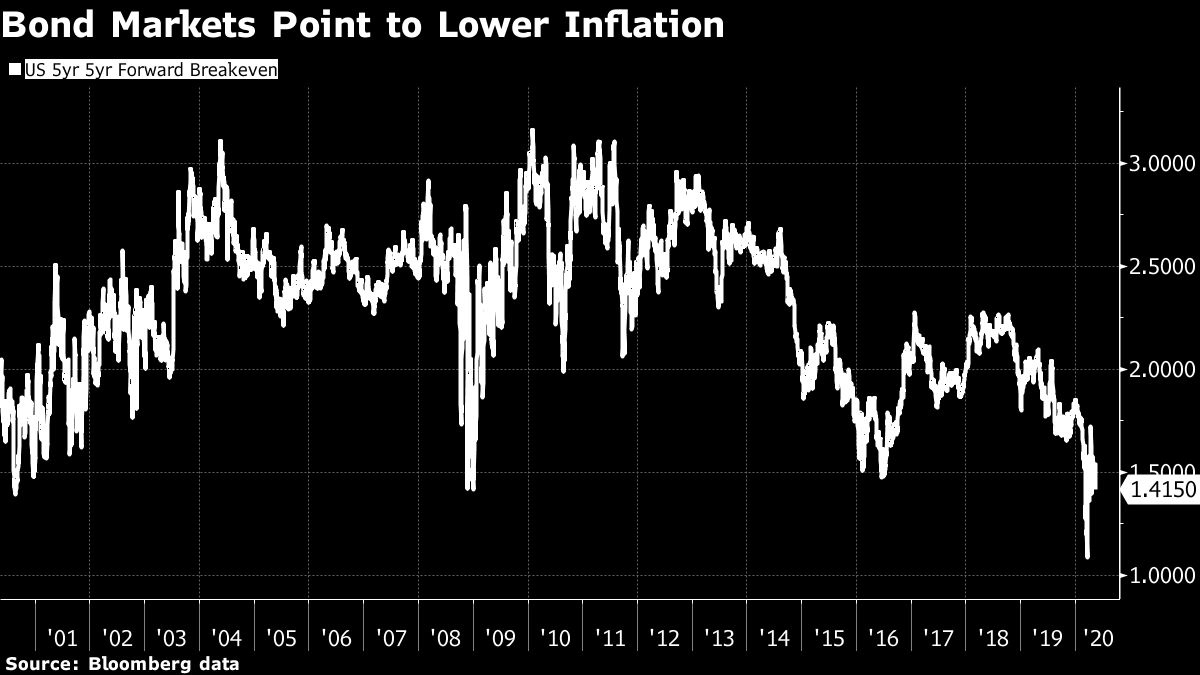 “The speed of money transmission has slowed down so much,” says Darwei Kung, head of commodities and portfolio manager at DWS Group. “Without that changing, it doesn’t really tell us we’re going to have a high-inflationary scenario coming back.”

Those betting on gold argue that there are key differences between now and 2008.

First, governments have responded to the coronavirus shock with larger stimulus measures, and show greater readiness to build up debt levels.

“We expect policymakers to target and applaud mid-single digit inflation, which, combined with interest rate suppression, will be the only way to outgrow the mounting debts,” Einhorn’s Greenlight Capital argued in a letter to investors.

“It’s almost inevitable that there will be a fiscal tailwind for gold — when markets wake up to the scale of the stimulus,” agrees Catherine Doyle at Newton Investment Management.

Second, the current economic crisis is not just hitting demand for goods and services but also supply. Businesses have shut down and, in the longer term, the crisis may push companies to redraw supply chains.

Even if hyper-inflation isn’t round the corner, the costs of holding gold are relatively low in the current economic environment. Russ Koesterich, portfolio manager of the US$20.5 billion BlackRock Global Allocation Fund, points to gold’s inverse relationship with real interest rates: when interest rates, adjusted for inflation, are low, the opportunity cost of holding gold is similarly low. Currently, real rates are negative. 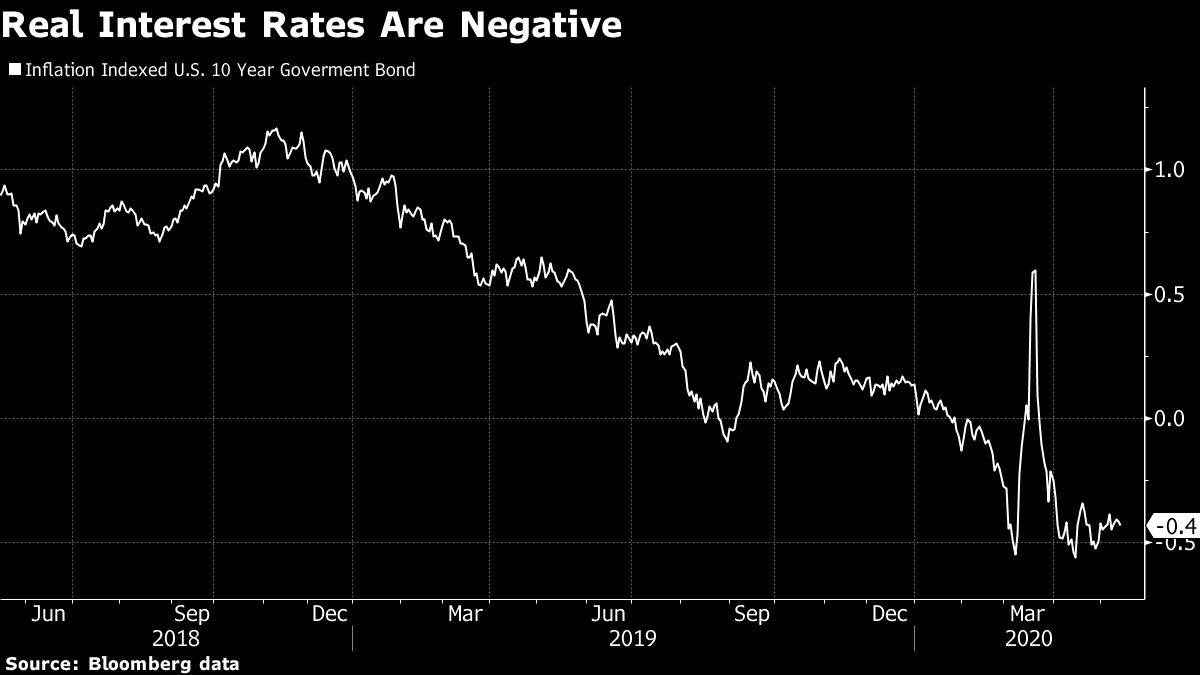 That means even if inflation doesn’t accelerate, the prospect of policy interest rates near zero — or even negative — for the foreseeable future should boost the metal’s appeal.

“In an environment in which bond yields are close to zero, and decidedly negative after inflation, there is no opportunity cost to holding gold. Historically, this is when gold has performed the best,” says Koesterich, who has been increasing his gold exposure.

And, just as in 2008, the arrival of high-profile backers may continue to buoy the gold market. Exchange-traded funds tracking the precious metal have seen the biggest dollar inflows on record in the first five months of the year.

“The people that were expecting QE to result in much higher gold prices in 2008, are now saying, ‘my god!,” said John Reade, chief market strategist at the World Gold Council and a former partner at Paulson & Co. “The key is, does that view become more widely held?”