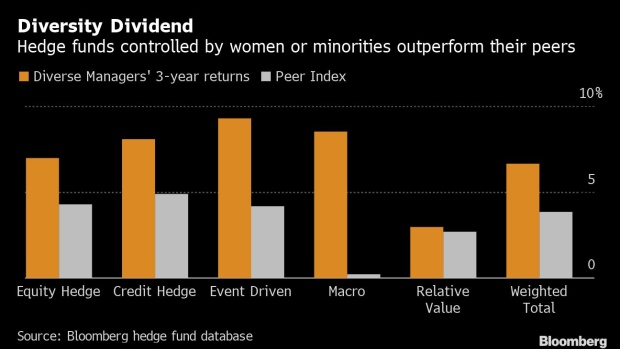 (Bloomberg) -- Hedge funds not controlled by white men had returns almost double their peers the last three years, and the advantage continued even in times of crisis, according to a Bloomberg analysis of hedge fund data.

Hedge funds either controlled or managed by a minority or female leader had a return of about 6.6% over the past three years, compared to about 3.9% for their peers, the analysis of Bloomberg’s hedge fund database found. Macro funds, which invest in broad, global trends, had the biggest disparity.

During the previous five years, the funds not managed by white men outpaced their peers by about 41%, the data showed. The advantage wasn’t limited to times of relative growth, as minority- and female-led funds also outperformed peers during times of crisis such as the Lehman Brothers default that sparked the last recession as well as the Libya oil shock in 2011, the analysis found.

--With assistance from James Munro and Cara Slear.

To contact the reporter on this story: Jeff Green in Southfield, Michigan at jgreen16@bloomberg.net

To contact the editors responsible for this story: Rebecca Greenfield at rgreenfield@bloomberg.net, Philip Gray