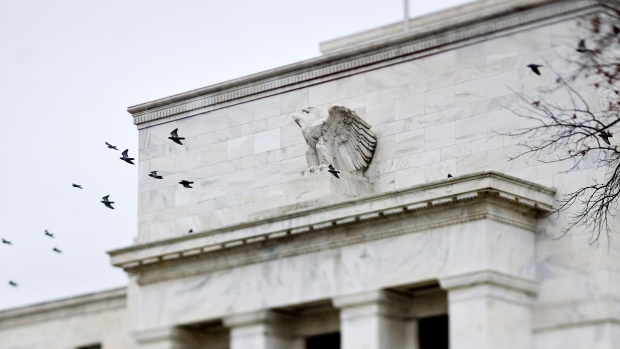 (Bloomberg) -- The betting window is open in the fixed-income market as hedge funds and other traders hunt for mispriced risk heading into 2022 -- whether it’s predictions for accelerating inflation or rising interest rates.

Volatility has picked up recently in rates markets as investors around the world adjust to a changing landscape, with the emergence of the omicron coronavirus variant posing risks to growth and a pivot by the Federal Reserve sparking a reassessment of inflation and policy expectations.

Uncertainty around these has helped drive the ICE BofA MOVE Index, a widely watched gauge of Treasury volatility based on options, to levels last seen at the onset of the pandemic crisis. And a fresh reading on the American labor market Friday has done little to shift market pricing that suggests the Fed will tighten next year.

“It will be a close game of chicken into mid-2022 between market fears and macro facts,” TD Securities wrote in its outlook for the coming year.

It comes on the heels of a tumultuous 2021, which was riddled with rates-market twists and turns that crippled some investors and scarred others. What’s in store for 2022 remains to be seen of course, but here’s a taste of what some hedge funds and strategists are thinking as they prepare for the new year.

Rob Citrone, who oversees around $2.4 billion as founder Discovery Capital Management, reckons that U.S. central bank rates are going to rise and advocates betting on an increase via March 2023 eurodollar futures. He expects that the yield on that contract, which is currently around 1.2%, will climb to around 2%, with the first Fed rate increase taking place in June and quarter-point hikes at each subsequent meeting.

That is one of the two most important trades that he is pursuing in the rates space at the moment, he said, with the other being a wager that South Africa’s central bank will need to tighten faster than expected and the five-year swap rate there will rise from 6.5% to about 8.5%.

Decio Nascimento, chief investment officer and founder of macro hedge fund Norbury Partners, is betting on an increase in interest rates too, but at the longer end of the borrowing curve. The $115 million manager favors swap trades around the 10- to 30-year sectors that involve paying current fixed rates and receiving future payments at a floating rate.

“We are willing to pay the current rate to receive whatever rate will be in the future because we believe rates in the future will be higher than today,” he said. “That should perform when growth and inflation is very healthy and the Fed starts hiking rates, and it works if the Fed is behind the curve and decides not to hike. It just doesn’t take into account potential deflation but we don’t think that’s a possibility. This is our largest risk, our largest position.”

Guneet Dhingra, head of U.S. interest rates strategy at Morgan Stanley, recommends betting that yields in the so-called belly of the Treasury curve will rise more than those on shorter and longer maturities. That’s a trade that can work if you think the Fed will hold off on raising rates soon, but will move quickly when it does start hiking. Dhingra advises shorting seven-year bonds, while being long on both two-year and 20-year debt: a so-called butterfly trade.

Dhingra thinks that the Fed will refrain from hiking until 2023, much later than the market is currently pricing, and that two-year yields will move lower as a result. Meanwhile, shorting the seven-year allows one to capitalize on bigger hikes when they do eventually come, while going long on the 20 allows for a potential reallocation from equities to fixed income by pension plans.

Kathryn Kaminski, a portfolio manager at $6.4 billion quantitative fund manager AlphaSimplex Group, is seeing pressure on bonds more broadly as inflation risks exert their influence. The computer-driven models at AlphaSimplex are sending “more short signals on bonds,” she said. “As central banks start to raise rates -- or even just need to raise rates -- you may see more impact from the bond sector on the short side, which is extremely rare for our business.”

Nadine Terman, chief investment officer of Solstein Capital, is much less bearish about Treasuries and is on alert for opportunities to buy bonds if the U.S. 10-year rate -- which was around 1.44% on Thursday -- climbs back to 1.6% or above. Terman, who oversees more than $285 million, reckons that the Fed could be heading toward a policy mistake if it tightens while growth slows in 2022. Should that occur, the nominal 10-year yield could slip back to around 1.10% by mid-2022 and the 30-year rate could veer toward 1.20%. “These drops in yields would be a positive for bonds, especially long-duration,” she said.

Chris McReynolds, head of U.S. inflation trading at Barclays, has a suggestion meanwhile for those who might not be convinced that an acceleration in CPI will be a long-term problem. He thinks that pricing of Treasury inflation protected securities around the five year mark has gotten too stretched and that there’s an opportunity to short them.

(Adds news on labor market. A previous version of this story was corrected to amend the title of Barclays’ McReynolds.)