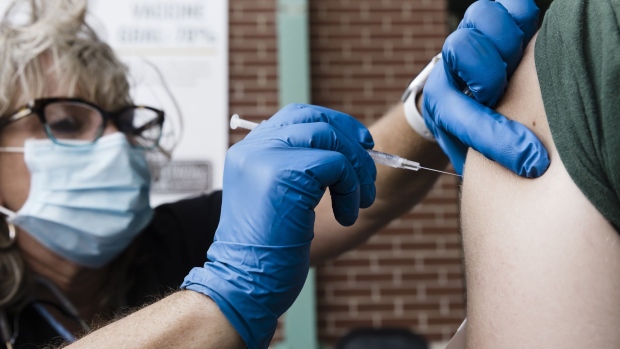 A healthcare worker administers a dose of the Pfizer-BioNTech Covid-19 vaccine at a pop up vaccination site at Hammons Field in Springfield, Missouri, U.S., on Tuesday, Aug. 3, 2021. Some of the most vaccine-resistant parts of the U.S. are now leading the country in the number of people getting a first dose of vaccine, a Bloomberg analysis shows, as surging infections and rising hospitalizations push formerly reluctant Americans to protect themselves. Photographer: Angus Mordant/Bloomberg , Bloomberg

(Bloomberg) -- High earners are among the most likely to hold misconceptions about the Covid-19 vaccine, according to a recent U.S. survey. The findings provide a glimpse at how resistance and hesitancy to get the shot are linked to uncertainty and false information.

COVID States Project, a group of researchers from Northeastern, Harvard, Rutgers and Northwestern universities, asked 20,669 people in all 50 U.S. states to evaluate four misconceptions related to the vaccine, including that it can cause infertility, alter DNA, and contains tracking devices and tissue from aborted fetuses. Respondents making more than $100,000 believed at least one falsehood 26% of the time, more than any other income group, the survey found.

Of those who make less than $25,000 per year, 22% marked at least one vaccine falsehood as accurate, while those in the middle brackets ranged between 16% and 19%.

One-fourth of Republicans held vaccine misperceptions compared to 18% of Democrats. The biggest gap was among different age groups: Just 9% of those 65 and older believed any of the false claims, followed by 17% of people aged 45 to 64 and 22% of those between 18 and 24. Those 25 to 44 were most likely to believe misinformation, with 29% marking at least one false claim accurate.

Overall, 20% of survey respondents believed at least one vaccine misinformation statement. Many people were uncertain, with 51% unsure whether to believe at least one false claim. African Americans had the highest uncertainty about the four pieces of misinformation at 48%, followed by 40% for Asian Americans, 39% for Whites and 38% for Hispanics.

“Vaccine attitudes are associated not only with believing misinformation, but also with experiencing uncertainty,” researchers wrote.

The proliferation of vaccine myths on social media has caught the ire of politicians, as the delta variant spreads through unvaccinated communities and hospitalizations spike. President Joe Biden last month said social media platforms such as Facebook were “killing people” by spreading vaccine falsehoods. Senate Republican leader Mitch McConnell also recently said low vaccination rates are due to misinformation and that “bad advice should be ignored.”

COVID States Project released a survey in July that found people most reliant on Facebook for information have much lower vaccination rates than those who rely on other sources. Facebook news consumers were also less likely to be vaccinated than those who got Covid-19 information from Fox News.