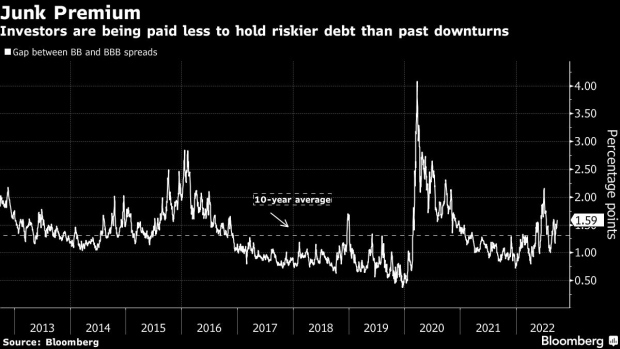 The average yield on the lowest-rated tier of investment-grade bonds hit 5.75% on Friday, the highest since 2009, when companies were recovering from the financial crisis. That’s what the best quality junk borrowers were paying as recently as June, but investment grade has much less credit risk.

“High-yield investors should extend into investment grade as much as their mandates allow,” wrote Oleg Melentyev and Eric Yu, strategists at Bank of America, in a note on Friday. “A 5%-7% yield in credits largely agnostic to recessionary outcomes is not often seen.”

One reason yields jumped on BBB rated bonds is that investors are worried about them being cut to junk, which typically results in a steep drop in price, said Bill Zox, a high-yield portfolio manager at Brandywine Global Investment Management.

“Dedicated investment-grade managers are staying away from BBBs,” Zox said. “That can result in low BBBs getting attractive compared to BBs.”

The difference between spreads on BBB and BB bonds is about 1.6 percentage points, lower than in past downturns. As a result, investors aren’t getting paid significantly more for taking extra credit risk.

“We are going into a slow-growth environment, so the premium should be larger,” Vishal Khanduja, co-head of US multi-sector fixed income at Eaton Vance. “That’s why we are preferring to own more BBBs, or investment-grade companies, versus BBs. The goal here is to be a little bit safer, a little bit more high quality.”

In the BBB market, CreditSights Inc.’s Winnie Cisar, global head of strategy, recommends debt from the likes of General Motors Co., HP Inc. and Warner Bros. Discovery Inc., given spreads that are wider than debt with the same rating.

“BBB valuations, especially on a yield basis, are compelling when compared to pre-pandemic levels,” strategists led by Cisar wrote in a note dated Sept. 14.

Bank of America strategists not only recommend buying higher-quality assets as risks of a recession loom -- they also see value in purchasing bonds with higher duration.

“Our strongest conviction is in high quality, investment-grade, and longer duration segments of the market, where we think value is back in a big way,” the strategists wrote.

At current levels, BBB notes are “a rare opportunity,” the Bank of America strategists add.

To be sure, high-grade debt is hardly a slam dunk. Given its higher duration than junk, there is more interest-rate risk at a time when the Federal Reserve is hiking rates, and BBB notes have lost almost 18% this year.

But some BBB rated bonds have lower duration than the average for high-grade. For example, a T-Mobile USA bond due in April 2030 with a 3.875% coupon yields about 5.7%.

About five companies looking to sell new bonds in the investment-grade primary market on Monday stood down due to volatility.

Companies that need to refinance bonds have never been faced with costs this high.

Concern is growing among investors that central bank policy tightening to tame inflation may cause a global recession, and that’s sparking increases in dollar bond spreads and debt insurance costs in Asia excluding Japan.