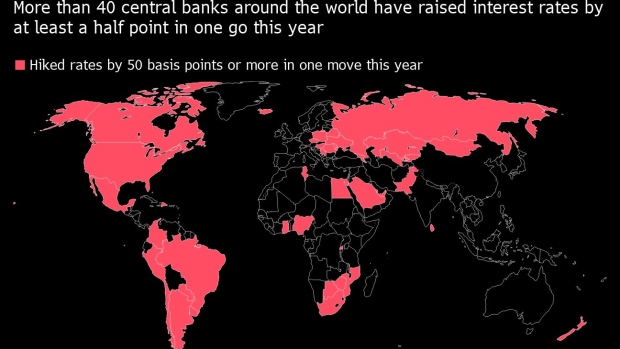 Robert Holzmann, governor of Austria's central bank, gestures during an interview in Helsinki, Finland, on Friday, Sept. 13, 2019. Holzmann said the easing package approved by the European Central Bank on Thursday was possibly a mistake and can be changed after incoming President Christine Lagarde takes over from Mario Draghi. , Bloomberg

(Bloomberg) -- The European Central Bank should consider kicking off its interest-rate hiking cycle with a half-point increase to convince people that it’s serious about fighting inflation, according to Governing Council member Robert Holzmann.

A step of 50 basis points would be “appropriate” in July, the Austrian governor said in an interview in Vienna on Tuesday, contrasting with ECB President Christine Lagarde’s more cautious approach in a blog post the previous day suggesting a quarter-point move.

“A bigger step at the start of our rate-hike cycle would make sense,” said Holzmann, one of the most hawkish members of the Governing Council. “It would keep people on their toes and signal to markets that we’ve understood the need to act. Everything else risks being seen as soft.”

The euro extended gains versus the dollar and short-end German bonds pared their advance after the publication of Holzmann’s comments. Traders held rate-hike bets steady, wagering on about 34 basis points of ECB tightening by July.

A half-point hike would echo the US Federal Reserve’s more aggressive approach adopted earlier this month, when it accelerated its tightening with a move of that size. More than 40 global counterparts have also used increases of at least that increment so far this year.

Lagarde’s timetable signaling two smaller hikes by the end of the third quarter irked hawkish officials wanting the option to act more aggressively, according to people familiar with the matter.

“I appreciate her speaking up and realizing that the time for liftoff has come, but I would have liked to see clear communication about how we’ll get to neutral rates,” Holzmann said on the president’s new message on monetary policy.

Holzmann is only the second official on the 25-member Governing Council to openly air the possibility of such a large hike. His Dutch colleague, Klaas Knot, said on May 17 that he would prefer a quarter-point increase, “unless new incoming data in the next few months suggests that inflation is broadening further or accumulating.”

The ECB first outlined plans to unwind unprecedented monetary stimulus last December, and has accelerated its schedule repeatedly since then after inflation climbed from one record to the next.

Traders are pricing in four quarter-point hikes this year, which would take the deposit rate -- currently at -0.5% -- firmly back above zero after for the first time in almost a decade.

“It’s extremely important to end the year in positive territory, and it would be justified given inflation will remain above 2% also in 2023 and 2024,” Holzmann said. “It’s time for monetary policy to act and to remove monetary accommodation.”

Earlier on Tuesday, Lagarde told Bloomberg Television in Davos that the ECB won’t rush into withdrawing stimulus. She and Villeroy de Galhau both emphasized that policy normalization needs to proceed gradually.

At the moment, the ECB insists policy shifts must reflect specific forward guidance, a tool that proved crucial when inflation was too low and the ECB’s room to maneuver on interest rates and asset purchases was stretched. Holzmann argued there’s no need for this instrument anymore.

“We shouldn’t keep markets in the dark and communicate our intentions,” he said. “But the strict forward guidance we have currently no longer makes sense with inflation that high.”