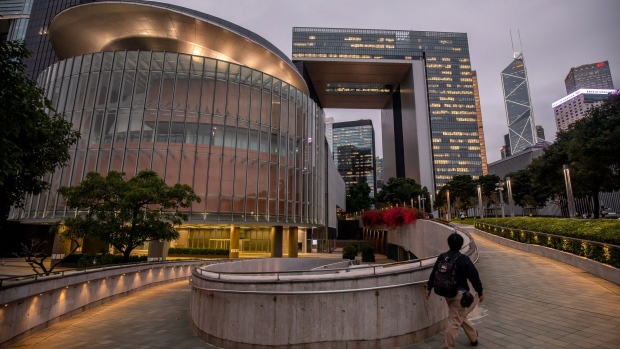 A pedestrian walks past the Legislative Council building, left, and the Central Government Offices, center, at dusk in Hong Kong, China, on Tuesday, Nov. 23, 2021. Hong Kong's border with mainland China won't fully reopen before next month's vote on the local legislature, the city's leader said, as officials from both sides work to restore economically crucial ties. Photographer: Paul Yeung/Bloomberg , Bloomberg

National security police arrested two men, age 28 and 29, on Tuesday morning for publishing social media posts that promoted “ill-will and enmity between different classes of the population of Hong Kong,” officials said in a statement.

One of the arrested was a Home Affairs Department clerk, while the other was a systems analyst at the Office of the Government Chief Information Officer, according to the South China Morning Post. Both were administrators of a Facebook group called “Civil Service Secrets,” local media reported.

Police also arrested two paramedics on suspicion of fraud and are investigating five Fire Services Department workers in connection with the case, the SCMP reported. Those probes come after an immigration officer and government IT technician were arrested by security police under sedition charges last week.

Hong Kong introduced a loyalty oath for civil servants in October 2020, after government workers took part in the previous year’s street protests. Beijing imposed a national security law in the wake of that unrest, which carries sentences as long as life in prison for acts of secession, subversion, terrorism and colluding with foreign forces.

Security police have since arrested at least 213 people, including some 42 for the British-era sedition offense, which had been dormant for decades until its revival in 2020.