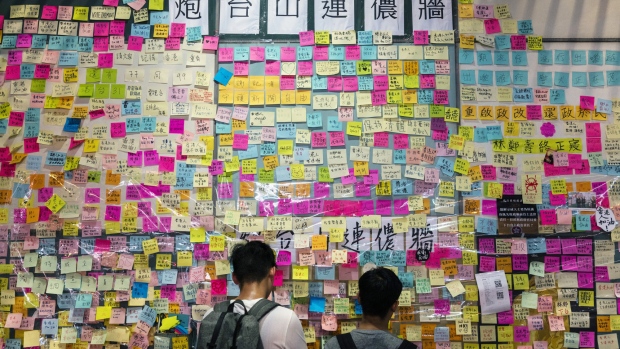 (Bloomberg) -- Hong Kong public walls have become the latest flashpoints between anti-extradition bill demonstrators and those opposed to the protest, with three people arrested in clashes at message boards that have sprung up in districts throughout the city.

The so-called Lennon Walls -- named after a memorial created in the 1980s in Prague to honor Beatle John Lennon’s message of peace -- have appeared in random public spaces, from areas outside train stations, to subway crossings and footbridges. Expressions on brightly-colored stickers adorn the walls, offering support, calling for the withdrawal of the draft legislation and criticizing the police’s handling of related protests.

There were arguments at separate walls in Kowloon this week, according to police. Two former policemen, ages 56 and 57, were among those held for alleged assault after a confrontation with protesters at Yau Tong railway station, the South China Morning Post reported.

Hong Kong has been besieged with rallies and demonstrations in recent weeks -- including one that drew a record 2 million people, by organizers’ estimates -- against the bill. The draft legislation would allow the city’s administration to enter one-time deals to transfer criminal suspects to various jurisdictions, including mainland China.

While Chief Executive Carrie Lam has declared the controversial legislation “dead,” she stopped short of officially withdrawing the bill, a key demand of the protesters. They are also calling for her resignation, the release of arrested demonstrators and an independent investigation into the police’s handling of the protests.

Protest leaders are taking their rallies on the road, shifting from the city center to outlying towns and villages. On Sunday they plan to march through the east New Territories district of Sha Tin, which is popular with mainland tourists.

The Lennon Walls have opened a new front for the protesters as they seek more creative ways to express their dissatisfaction with the government. The first message-board wall in Hong Kong appeared during the 2014 Occupy protests next to a staircase at the city’s legislature in Admiralty.

--With assistance from Carol Zhong.

To contact the reporter on this story: Stanley James in Hong Kong at sjames8@bloomberg.net

To contact the editor responsible for this story: Shamim Adam at sadam2@bloomberg.net