One Hong Kong businessman moved US$10 million to Singapore and plans to transfer more. Another is eyeing London property, worried that prices in Hong Kong are too high. Well-to-do families across the city are opening offshore bank accounts and applying for alternative passports.

While it doesn’t add up to an exodus just yet, Hong Kong’s rich are increasingly hedging their bets as the financial hub suffers its worst economic and political crises since at least 1997.

Many high-net-worth investors are either reducing their Hong Kong exposure or taking steps to ensure they can withdraw assets at a moment’s notice, underscoring the challenge for Chief Executive Carrie Lam as she tries to maintain the city’s status as magnet for Asian wealth. Rich individuals are major players in Hong Kong’s equity and real-estate markets as well as big buyers of Chinese corporate bonds issued in the city.

Private bankers say their clients accelerated contingency planning efforts after China announced last month it would impose controversial national security laws on Hong Kong. The legislation threatens to erode the former British colony’s judicial independence, provoke sanctions from the U.S. and revive street protests that battered the tourism and retail industries even before the coronavirus outbreak plunged the economy into its deepest recession on record.

“What we’re basically seeing is a bit like a slow-moving train wreck,” said Richard Harris, chief executive of Port Shelter Investment Management in Hong Kong. “People who haven’t moved their money out may be tempted to think: ‘Well, maybe I should be moving my money out.’ That process is likely to continue.”

To be sure, there’s little evidence so far of widespread capital flight.

Hong Kong bank deposits increased to a record in April and the city’s currency has continued to trade at the strong end of its permitted band against the dollar. Hong Kong’s wealthiest billionaires have publicly endorsed the proposed security laws and expressed confidence in the city’s future. 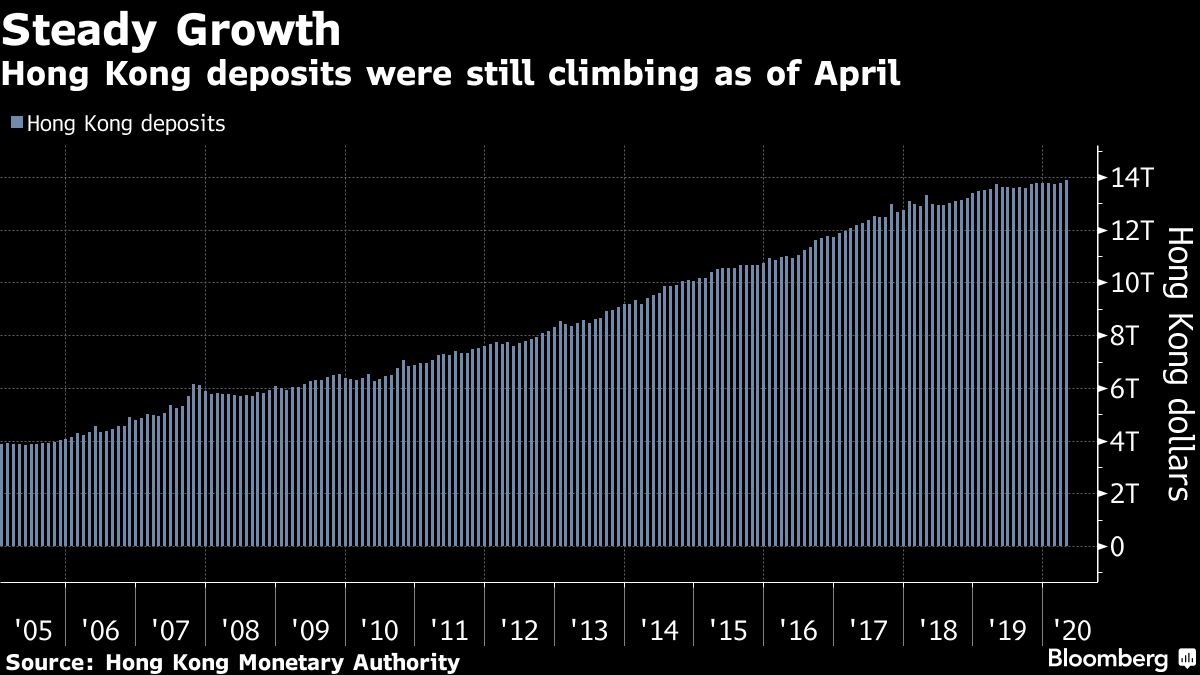 In private, however, many Hong Kong entrepreneurs and high-earning professionals are sounding a more pessimistic note.

Cheng, the businessman who moved US$10 million to Singapore, also secured his permanent resident status in the city-state this year and has been selling his Hong Kong properties. He has no concrete plans to emigrate yet, but is considering his options. He and his family have passports from the U.S., Canada, Australia and France.

Cheng, who was born in Hong Kong, said he worries about China’s tightening grip on the city and the prospect for more unrest. Like several of the people quoted in this story, he asked not to reveal his full name because of the political sensitivity of the subject.

Sam, a senior investment banker in Hong Kong, has decided to leave the city. The 43-year-old is emigrating to Australia with his wife and two young boys in about three months, the second time he will have left Hong Kong during a period of political turmoil. Sam grew up in the city, but moved to Brisbane when he was 12 after his parents got spooked by China’s crackdown on protesters in Beijing’s Tiananmen Square in 1989. He came back to Hong Kong 20 years ago for his career but now sees no upside to staying.

“Things are looking bad and deteriorating,” he said. “We may as well pack our bags and move to Australia so that the kids can have a better environment growing up.”

Margaret Chau, a Hong Kong-based immigration program director for Goldmax Immigration Consulting Co., said inquiries at her firm have jumped about five-fold after news of the national security legislation. For now, most of her wealthy customers are more interested setting up an escape route than leaving right away.

“They see this as a backup plan,” Chau said.

Kerry Goh, chief executive officer of multi-family office Kamet Capital in Singapore, said his clients have shifted from asking generic questions about moving out of Hong Kong to making detailed inquiries about everything from schools to visas and bank accounts.

“What’s happened in Hong Kong has really sped up the timing of 2047,” Goh said, referring to the expiration date of China’s 50-year pledge to preserve Hong Kong’s autonomy after the handover from Britain. “As Hong Kong’s troubles shoot up, the benefits of Singapore have become more self-explanatory.”

Other more far-flung locales are also attracting increased interest from investors in Hong Kong. Puerto Rico’s Standard International Bank, a so-called International Financial Entity that expanded its footprint in Asia last year, has seen its deposits more than triple since December 2019, according to general manager Maria Diaz. “Turbulence in Hong Kong has changed the landscape,” she said.

Dennis, a 34-year-old executive at a Hong Kong-based consulting firm founded by his parents, said his family and many of their friends have started moving cash out of the city. He’s looking to buy more properties in the U.K., where he spent almost a decade attending boarding school and university.

“I could buy a much bigger flat in London, so why not?” he said. “I’m just trying to protect my money against any uncertainty.”