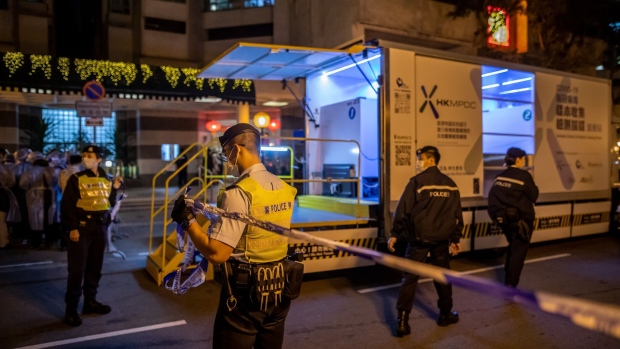 Government workers wearing personal protective equipment (PPE) prepare a mobile testing unit outside a building under lockdown at the Laguna City residential estate in the Kwun Tong neighborhood of Hong Kong, China, on Sunday, Jan. 31, 2021. The government ordered residents in two blocks of a residential estate in the Kwun Tong area of Kowloon Peninsula to stay inside until they have been tested for Covid-19, as the city launches another targeted operation aimed at containing a surge of coronavirus cases. , Bloomberg

(Bloomberg) -- Hong Kong is threatening to knock down the doors of residents who don’t respond to authorities conducting mandatory-testing blitzes as the city tries to end a persistent winter wave of coronavirus cases.

“The government can take legal action, including evicting or expelling individuals, or applying to the magistrate for a warrant to break into the unit,” the government said in a statement Tuesday.

The Asian financial hub has been attempting to curb a fourth wave of Covid-19 infections with targeted lockdowns that see authorities cordon off an area and restrict movement until residents receive negative results. The government has suggested some might be deliberately evading the tests in areas that range from densely packed neighborhoods to just a handful of buildings.

During surprise lockdowns in four Hong Kong districts Monday evening, roughly 17% of the 680 households that officers visited didn’t answer the door, according to Bloomberg calculations. The government said it found no positive cases after testing almost 1,700 residents.

Amid criticism that some of the mini-lockdowns haven’t been effective at uncovering positive cases, Hong Kong Chief Executive Carrie Lam defended the operations on Tuesday. She said they were one preventative measure among many and that the number of confirmed cases unearthed wasn’t the only metric of success.

“You can’t really measure the effectiveness of these operations by the number of cases identified,” Lam said at a weekly briefing ahead of a meeting of her advisory Executive Council. “I don’t think it’s a waste of resources.”

“President Xi has expressed concern and worries, and that’s totally reasonable,” Lam said. “I believe the president is very much concerned. He wants to support us.”