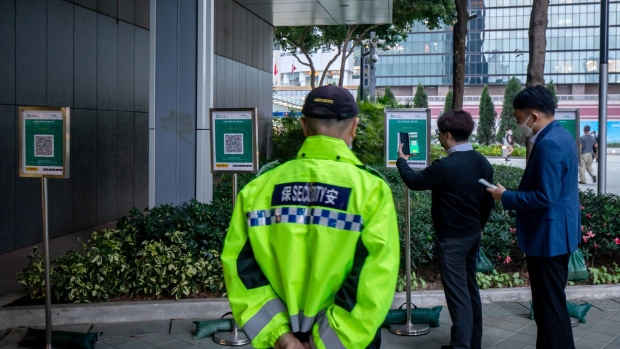 (Bloomberg) -- Hong Kong will roll out a China-style tracking app to reopen its mainland border, officials announced, closing a gap in surveillance that had been a sticking point in protracted travel talks.

“Our current idea is that the Hong Kong Health Code will be used with LeaveHomeSafe,” Chief Secretary John Lee said at a briefing on Thursday evening, explaining that the city’s current contact tracing app wouldn’t be retired.

The new health code will record a user’s real name and collect data on places they’ve visited, Lee added, without giving more information. Details will be announced next week so the “public can download it as soon as possible, learn how to use it and operate smoothly when the borders are officially opened,” he said.

The LeaveHomeSafe app lets users enter public venues by scanning a quick response code that’s pegged to their mobile phone, not their name, and doesn’t share data with the government. In mainland China, a mandatory health code has dictated where citizens can go since the pandemic hit, using a traffic light system. It knows a user’s name, identification number, close contacts, and shares data with local authorities.

Residents of the former British colony are already sensitive to mainland China’s growing control over the city after the central government imposed a sweeping national security law in June 2020 that’s stifled free speech. Hong Kong Chief Executive, Carrie Lam, has prioritized restarting quarantine-free travel to China over the rest of the world. That’s meant the city has to match Beijing’s stringent requirements as pursues a Covid Zero policy of trying to eliminate the virus from its borders.

With the addition of the app Hong Kong has fulfilled the basic conditions to reopen the border, Lee said Thursday, after returning from the southern city of Shenzhen to meet with Chinese officials. The city will ramp up testing of high risk groups ahead of the reopening and submit reports to the mainland, he added.

Two cases of the new Covid-19 strain raising alarm in parts of southern Africa have been found in travelers arriving in Hong Kong, the government said Thursday.