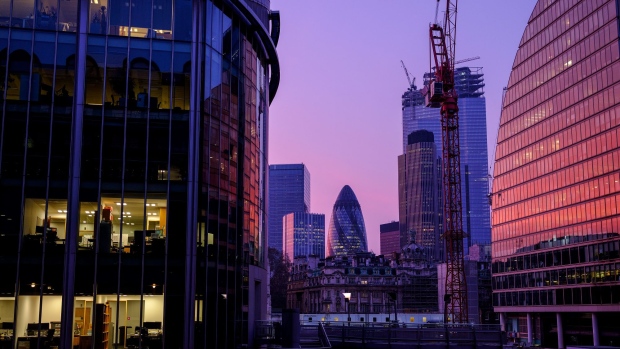 Skyscrapers including; 30 St Mary Axe, also known as "the Gherkin" and 2 2 Bishopsgate office tower, stand on the skyline in the City of London, U.K., on Saturday, April 13, 2019. Job vacancies in London’s finance industry have halved in two years as uncertainty over Brexit knocks business confidence, a survey by recruiter Morgan McKinley has found. , Bloomberg

(Bloomberg) -- London landlords eager to sell properties in the U.K. capital are seeing strong demand from investors fleeing an even more uncertain future in Hong Kong.

As Oxford Properties Group, the real estate arm of the Ontario Municipal Employees Retirement System, has looked to wind down some investments in London, worries over Brexit have taken a back seat.

“There’s a very strong bid right now from the flight capital, particularly out of Hong Kong,” Oxford President Michael Turner said in an interview. “London is the most international market in the world. And when we have a brand-new, shiny, well-developed building and somebody says, ‘I just want to get my money out of China.’ Then we say, ‘Here you go.’”

In the past four years, Oxford has sold stakes in London offices including the Cheesegrater skyscraper and buildings on Paternoster Square. Bloomberg reported last month that the firm is considering a deal to sell its stake in a 700 million pound ($882 million) office complex in London’s financial district to its partner, Brookfield Property Partners LP.

Turner stressed that Oxford is not leaving London; he just sees better opportunities elsewhere for the next few years. Selling the U.K. properties has freed up funds to extend a global push. Turner said Oxford is looking for growth in Asia, as well as in the U.S. South and West. The company is also one of the developers behind New York’s Hudson Yards.

Turner spoke Thursday on the sidelines of a symposium in San Francisco that Oxford co-hosted with OMERS’ venture capital arm. The unit, which set up a Bay Area office earlier this year, is seeking to make more investments in property technology and presented a series of panels on innovative approaches to office design, retailing and building construction.

Looming over the discussion was WeWork, the flexible-office provider that shelved its initial public offering last month. The company has been the “elephant in the room” for venture investors for some time, given the amount of capital it raised, and its private-market valuation, which once stretched to $47 billion, said Michael Yang, who leads OMERS Ventures’ investment efforts in the U.S.

The flexible-office sector has become a prolific occupier of space in recent years, accounting for as much as 30% of net absorption, a measure of demand, in the U.S., according to a report this week from Green Street Advisors.

“The immediate impact they’re going to have is taking the rate of growth out of some markets, such as London and New York,” Turner said. “Momentum investing is terrific until the momentum changes.”

To contact the reporter on this story: Noah Buhayar in Seattle at nbuhayar@bloomberg.net

To contact the editors responsible for this story: Rob Urban at robprag@bloomberg.net, Christine Maurus